Nate Bjorkgren is out after one season as the head coach of the Indiana Pacers, ESPN reported Wednesday.

The Pacers have yet to publicly announce the move regarding Bjorkgren, who guided the team to a 34-38 record. Indiana missed the playoffs after a blowout loss to the Washington Wizards in the play-in tournament.

Reports surfaced throughout the season that Bjorkgren had poor relationships with his players and members of the organization. That came to a head last month when assistant coach Greg Foster and center Goga Bitadze engaged in a tense in-game argument that led to a suspension for the former and a fine for the latter. 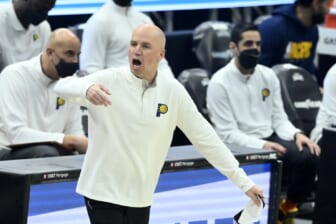 Pacers president Kevin Pritchard said during the team’s end-of-season news conference that he believed Bjorkgren micro-managed the team, but said that players were not unhappy with him in exit interviews.

Bjorkgren, 45, took over the head coaching position formally held by Nate McMillan, who was fired in August after four seasons with Indiana.

Bjorkgren spent the previous two seasons as an assistant coach with the Toronto Raptors.