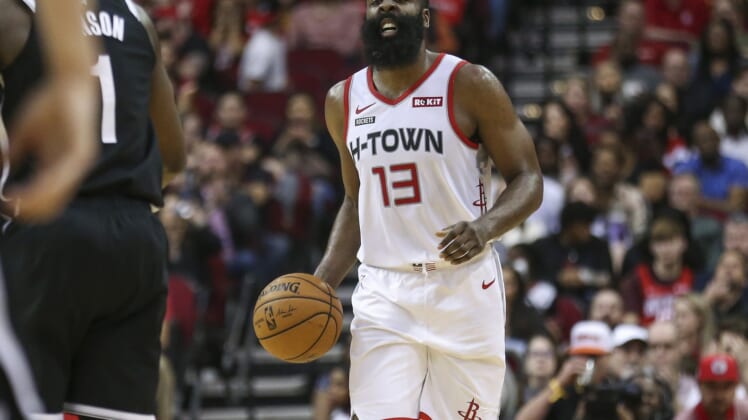 The Houston Rockets held their first practice ahead of the 2020-21 season. Said practice took place on Sunday. It also did not include former MVP James Harden, who remained away from the team after requesting a trade.

Harden took to Instagram Live after it was noted he was not in Houston with the rest of his team. His post should open some eyes.

Knowing James Harden and his social media activity in the past, this could clearly be seen as a response to the guard missing practice and his new head coach Stephen Silas’ take on the all-time great scorer.

“I want him here and I want him to be a big part of what we’re doing,” Silas said, via Marc Stein of The NY Times. The new head coach also referred the media to Harden when asked whether he thought the guard wanted to be with the Rockets this coming season.

Silas indicated on Sunday that the NBA COVID-19 protocols prevented Harden from being with the team for its first practice. The reason? Well, the former MVP was seen attending a birthday bash for hip-hop artist Lil’ Baby over the past few days.

Players were required by the NBA to report to home markets by either Nov. 28 or Nov. 30 to begin daily COVID-19 testing and start self quarantine. Obviously, James Harden opted against following the protocols. Rather, he was seen maskless at a crowded indoor party.

All of this comes weeks after Harden’s trade demand became public record. The Rockets’ brass is not happy about that development, especially after the star guard turned down an extension that would have made him the highest-paid player in NBA history on a per-year basis.

Among the teams linked to Harden in trade talks, the Brooklyn Nets and Golden State Warriors have come up more frequently than others.

Regardless of the drama unfolding in Houston right now, it’s not a great look for James Harden to ignore the NBA COVID-19 protocols while remaining away from the team.

Things are likely going to get more out of hand between Harden and his Rockets with about two weeks remaining until the start of the 2020-21 regular season.

The Rockets’ first preseason game is Friday against the Chicago Bulls.