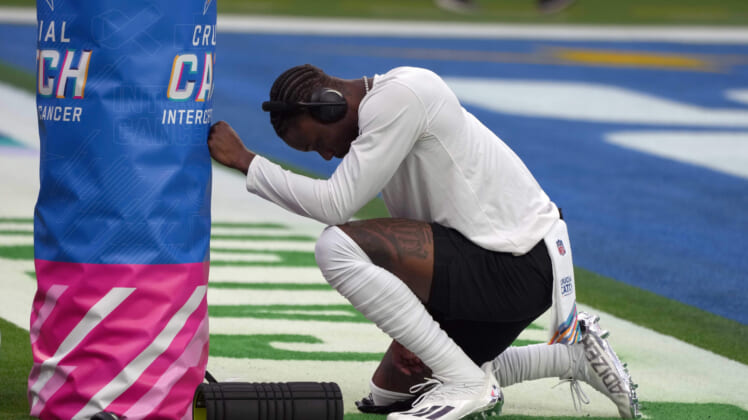 In what can’t be considered surprising news, the Las Vegas Raiders announced Tuesday evening that they have released Henry Ruggs.

The star second-year receiver was involved in a car accident early Tuesday morning in Las Vegas which led to the death of a 23-year-old woman. Immediately after news of the accident broke, local authorities announced that Ruggs would be charged with a DUI resulting in the death of the young woman.

Given the circumstances of the situation, the Raiders opted not to let due process play out. Rather, they took the initiative and moved on from the former Alabama standout.

The details of the early-morning accident are harrowing in that the deceased (and innocent) individual was stuck in her automobile before it caught fire. She was pronounced dead when authorities arrived on to the scene.

As for Henry Ruggs, it was clear earlier on Tuesday that his football career was a second thought. That included this statement from the Raiders themselves.

“The Raiders are aware of an accident involving Henry Ruggs III that occurred this morning in Las Vegas,” the Raiders said in a statement Tuesday. “We are devastated by the loss of life and our thoughts and prayers go out to the victim’s family. We are in the process of gathering information and will have no further comment at this time.”

Our thoughts go out to the victim and everyone impacted by this senseless tragedy.