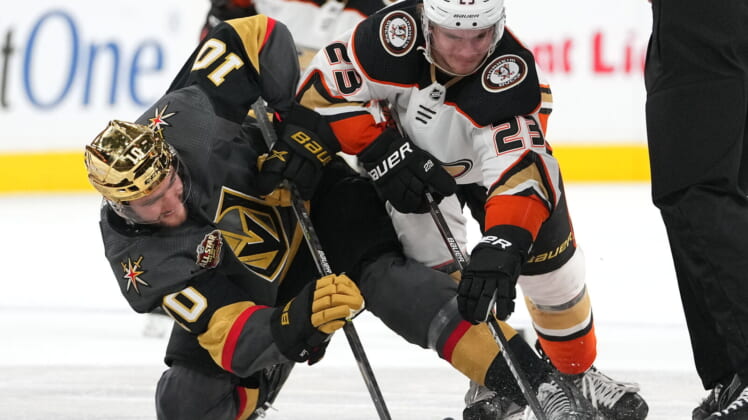 The Vegas Golden Knights bested the Anaheim Ducks with a 3-1 win in a battle of the top two teams in the Pacific Division. This season, the Ducks have been one of the NHL’s most surprising squads as their young players have stepped up and propelled them to a playoff position. However, the Golden Knights reminded the Ducks of who runs the division as they won the game easily.

The scoring started for the Golden Knights in the first period with a deflection from Nicolas Roy. Roy was all over the ice tonight and was quickly one of the most noticeable players on either team. His goal was just one example of depth players stepping up, which pushed Vegas to victory. They also got goals from Adam Brooks and Mattias Janmark.

The Golden Knights were without Max Pacioretty, who recently underwent surgery to repair an injured wrist. The surgery means that the Golden Knights will be without their deadliest sniper indefinitely. His absence today was lessened because the team got scoring from all over the lineup, something that will need to continue for the team to succeed.

The Ducks weren’t operating with a full lineup either as young star Trevor Zegras remains in the COVID-19 protocol. The Golden Knights also continue to miss Robin Lehner, who has a lower-body injury. This was the third consecutive game that the netminder missed.

The Ducks scored their only goal of the game with just eleven seconds left. They got a late power play and finally managed to put one up on the scoreboard, making the final score closer than the game was in reality.

The Golden Knights have been missing starting goaltender Robin Lehner for a few games now, but his presence hasn’t been missed too badly because of how well Brossoit has played. While the Golden Knights deserve credit for not making Brossoit’s job too tricky today against the Ducks, he did still manage to turn everything away while the game was still competitive.

He made all the saves he was asked to and deserved credit for his play of late. Brossoit was brought in this offseason to solidify the crease after the departure of Marc-Andre Fleury and he has done that and more. He and Lehner form one of the better goaltending duos in the league, a luxury that the Golden Knights have had since inception.

“A shutout would have been nice, but it’s not going to ruin my night,” said Brossoit after the game.

The Golden Knights dominated the Ducks at 5-on-5 during this game, which made the difference. All the stats and metrics leaned heavily in the Golden Knights favor as they controlled the puck inside the Ducks zone for extended periods of time.

By playing so well, the Golden Knights reduced the element of luck as they barely gave the Ducks any offensive chances. It was a complete game and an impressive performance considering the absence of key players like Pacioretty and captain Mark Stone.

The Golden Knights went 0-6 on the power play and easily won this game. There aren’t many teams that can fail to convert on six power plays and still dominate their opposition, but that’s exactly what the Golden Knights did. In addition, the Ducks are no slouches as they’re close to the top of the Pacific Division.

Vegas continues to morph into juggernaut

The Vegas Golden Knights are slowly morphing back into the juggernaut that everyone expected them to be before the season began. They had a tough start but have now shown that they can beat any team in the league as they’ve put together some awe-inspiring performances.

The scary part about this is that the Golden Knights have done all this despite not having a full lineup. They’ve had to deal with plenty of injuries and it’s frightening to think what this team will look like after all their players get a chance to gel together.

The big question mark is how newly acquired superstar Jack Eichel will fit into the team. When healthy, Eichel is one of the league’s best players, and he will be massive for the Golden Knights. However, his arrival will mean that the team will have to ship out a significant salary.

The Vegas Golden Knights play their next game on Sunday against the Winnipeg Jets. The puck drops for that game at 1 PM Pacific Time as the early start times continue.