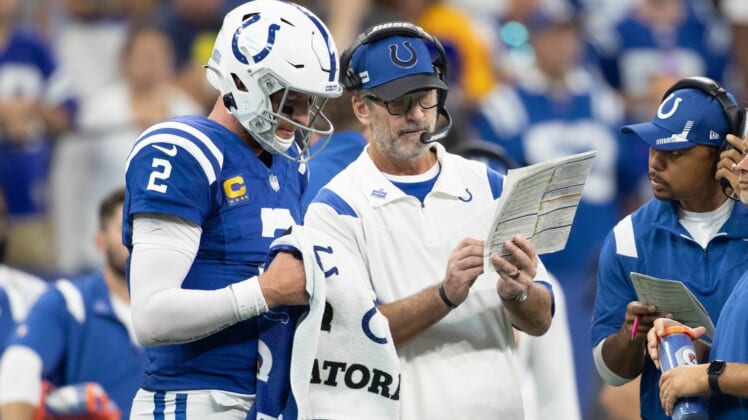 Colts general manager Chris Ballard wouldn’t commit to the future of the quarterback position — and incumbent Carson Wentz — when asked Tuesday at the scouting combine in Indianapolis.

“I don’t have the direct answer for you,” Ballard said. “We’re working through it. … Ultimately we’ll do what’s best for the Colts.”

ESPN reported on Feb. 13 that the Colts plan to trade or release Wentz by March 18. If he is still on the roster on that date, he is due his full $22 million base salary and a $6.29 million roster bonus.

If the Colts release Wentz before that date, they would owe him $15 million, according to the report.

Ballard said nothing Tuesday to dispel the report, and said a decision on Wentz will be made with owner Jim Irsay and head coach Frank Reich.

“Frank, Mr. Irsay and I will sit down over the next few weeks. We are going to do what’s best for the team both in the short and long term,” Ballard said.

Wentz, 29, went 9-8 in his first season as the starter in Indianapolis. He completed 62.4 percent of his passes for 3,563 yards with 27 touchdowns and seven interceptions but finished poorly.

He averaged just 166.5 passing yards in losses to the Las Vegas Raiders and lowly Jacksonville Jaguars in Weeks 17 and 18, knocking the Colts out of AFC playoff contention.

The Colts traded a first-round pick in the 2022 NFL Draft and a 2021 third-round pick to the Philadelphia Eagles to acquire Wentz last March.