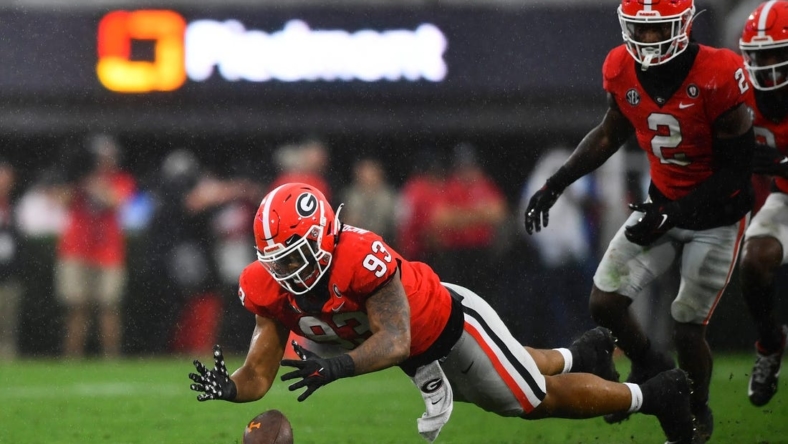 Stetson Bennett passed for two touchdowns and rushed for one to lead No. 3 Georgia to a convincing 27-13 victory over top-ranked Tennessee in Southeastern Conference play Saturday afternoon at Athens, Ga.

Bennett completed 17 of 25 passes for 257 yards and Ladd McConkey caught five passes for 94 yards and a touchdown as the Bulldogs (9-0, 6-0 SEC) defeated Tennessee for the sixth consecutive time. Marcus Rosemy-Jacksaint also had a scoring reception.

Jalen Carter forced two fumbles, Javon Bullard had two sacks and Kelee Ringo had an interception for Georgia, which held the Volunteers to 2 of 14 on third-down conversions.

Hendon Hooker was 23-of-33 passing for 195 yards and one interception for Tennessee (8-1, 4-1). Hooker had thrown a touchdown pass in 20 consecutive games prior to being unable to find the end zone against the Bulldogs.

Jaylen Wright rushed for a touchdown for the Volunteers, but standout receiver Jalin Hyatt had just six catches for 63 yards.

Georgia played without standout linebacker Nolan Smith, who will miss the rest of the season with a pectoral injury. But the Bulldogs still outgained Tennessee 387 to 289.

Tennessee landed the No. 1 spot in the first College Football Playoff rankings released Tuesday, but was routinely outclassed by the Bulldogs.

Jack Podlesny booted a 38-yard field goal with 1:06 left in the third quarter to give Georgia a 27-6 lead. Tennessee attempted to rally in a driving rainstorm, but Wright’s 5-yard scoring run with 4:15 left was all the Volunteers could manage.

Georgia outgained the Volunteers 306 to 139 while building a 24-6 halftime lead.

Tennessee struck first on Chase McGrath’s 47-yard field goal before the Bulldogs scored the next 21 points.

Bennett scored on a 13-yard keeper with 8:32 left in the first quarter and later connected with McConkey on a 37-yard scoring pass to make it 14-3 with 3:32 left in the period.

Georgia tacked on another score when Bennett hit Rosemy-Jacksaint on a 5-yard touchdown pass 43 seconds into the second quarter.

McGrath’s 36-yard field goal cut the Volunteers’ deficit to 21-6 with 9:36 left in the half. Podlesny kicked a 19-yarder for the Bulldogs as time expired in the half.