What a George Kittle contract would look like for the star TE, and San Francisco 49ers 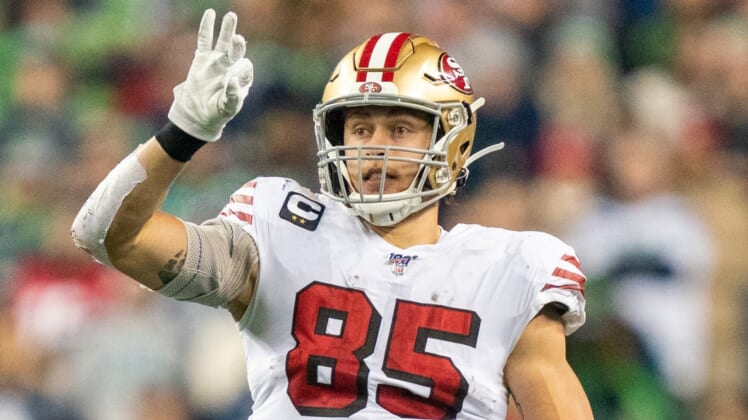 If the San Francisco 49ers can find the sweet spot and actually work out a long-term contract extension with George Kittle, it’s going to be a record-breaking deal that sets a new market. That’s a fact.

The real question is: Will the 49ers regret breaking the bank for the star tight end? Here, we examine what Kittle’s potential contract will look like for him, and for the franchise.

George Kittle contract: 49ers star worth more than any TE in the NFL

Recently, Kittle was named the seventh-best player in the NFL by his peers in the league’s annual Top-100 list. That’s any player at any position, and it’s hard to say he doesn’t deserve that level of credit.

Purely based on his abilities as a receiver, Kittle is elite. A former fifth-round pick out of Iowa, he burst onto the scene in his second season and has been dominating ever since. The past two years (2018-19), Kittle has racked up incredible stats as a pass-catcher: 173 receptions for 2,430 yards and 10 touchdowns — setting an NFL record along the way.

Yet as dynamic as he is in the open field catching passes, where Kittle truly separates himself is as a run blocker. His pancake blocks are the thing of legend, and given San Francisco’s zone scheme he’s practically irreplaceable.

“If your tight end can’t block the outside defensive ends, it’s extremely hard to run outside zone,” 49ers head coach Kyle Shanahan told reporters in January (h/t 49erswebzone.com), “and Kittle can do that whether they’re head up on him, which we call six-technique, or if they can do that with their head up outside on him, which we call a nine-technique. That’s very rare.”

It’s no wonder that Kittle’s agent, Jack Bechta, is on record saying he isn’t negotiating a tight end contract. Instead, per Michael Silver of NFL Network, he’s negotiating “a George Kittle contract.”

Currently, Cleveland Browns tight end Austin Hooper, who inked his free-agency deal in March, makes the most on a per-year average. According to Spotrac, Hooper averages $10.5 million per year.

Kittle, meanwhile, has been rumored to be seeking as much as $20 million per season — essentially what a top wide receiver would make in the NFL right now.

With that in mind, it’s not too surprising that the latest reports indicate the 49ers and their star aren’t close on a contract extension.

49ers salary cap management got trickier due to COVID-19

Kittle’s contract demands aren’t the only thing standing in the way of a deal with the 49ers right now.

The COVID-19 pandemic has significantly altered the way NFL franchises can approach finances. For instance, due to expected revenue losses in 2020 (some teams’ fans won’t be allowed in some stadiums, while others won’t have full capacity), the salary cap could drop from $198.2 million this year to as low as $175 million in 2021.

Considering the 49ers and every other team have been planning on the cap to continue rising in recent years as they structured contracts for other stars, this is extremely problematic. General manager John Lynch recently delved into this and admitted COVID-19 has made Kittle’s contract situation “tricky.”

However, he and the 49ers remain committed to the work of making it happen.

“Now we have that information,” Lynch said of next season’s cap (h/t Matt Barrows of The Athletic). “So we’ve traded ideas and things. And we’re really hopeful. We’re going to work extremely hard. George is such a great fit for what we do. He’s a tremendous player. (I’m) sitting here looking at the vision statement for what we want in a player. And George checks every box.”

The 2021 season isn’t the only one that could be impacted financially by the current coronavirus pandemic, however. The CBA amendment agreed to by the NFL and NFLPA spread out the losses in revenue over a period of a handful of seasons. So it’s unknown at this time exactly how much the 49ers, or any other team, will have to work with in 2022 and beyond.

Kittle isn’t alone: 49ers roster stacked with other players set to get paid

There’s another wrinkle to all this, too. Kittle isn’t the only star on San Francisco’s roster who should be seeing a significant payday in the coming years. That’s a factor that cap guru Paraag Marathe has to be wrestling with in a major way right now as he attempts to get Kittle signed to a long-term contract.

Here’s a look at the big decisions the 49ers have to make regarding their own free agents in the coming years.

As you can see, the 49ers have a bunch of talented mouths to feed. And that short list doesn’t even include pass rusher extraordinaire Nick Bosa, who will rake in a monster contract soon enough.

Kittle is a huge priority, but he’s hardly the only one. With all this in mind, it’s not all that hard to understand why the franchise still hasn’t locked Kittle up on a long-term contract extension. Basically, inking him to a record-breaking deal almost guarantees that the 49ers won’t be able to afford every star on their roster.

Do the 49ers need to figure it out? Absolutely. However, it’s a lot more complicated than it seems at first glance.