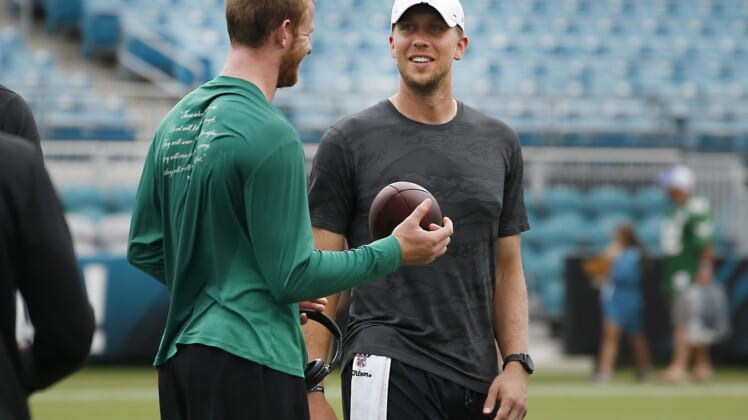 It was just over two years ago that former Philadelphia Eagles quarterback Nick Foles was on top of the football world after taking out Tom Brady and the New England Patriots. Replacing an injured Carson Wentz, Foles led the team to an improbable playoff run before earning Super Bowl MVP honors.

A lot has changed since then. Foles finds himself competing for a starting job with the Chicago Bears. Brady shockingly signed with the Tampa Bay Buccaneers back in March.

But in an attempt to bring this back to the forefront, former Eagles star Michael Bennett had an interesting take on the two quarterbacks. He told former NFLer Chris Long in a podcast recently that Foles is better than Wentz.

There’s a lot to look at here.

Back in 2017, Philadelphia posted a 13-3 regular-season record. Wentz started 13 games before suffering a torn ACL in December. Then a sophomore, the former No. 2 overall pick completed 60% of his passes for 3,296 yards with 33 touchdowns and seven interceptions.

Foles replaced Wentz for the final few regular-season games before leading Philadelphia to three consecutive playoff wins. That included a 373-yard performance in a 41-33 win over New England in Super Bowl LII.

Following a 2018 season that saw Foles once again replace an injured Wentz, the veteran quarterback opted out of his contract with Philadelphia. He ultimately signed a four-year, $88 million deal with the Jacksonville Jaguars, only to start four games with the team during an injury-plagued 2019 season. Foles was dealt to the Chicago Bears this past March for a fourth-round pick.

Shockingly, Philadelphia inked Wentz to a four-year, $128 million extension mere months after Foles and the team parted ways. Wentz went on to lead the team to a ho-hum 9-7 record and suffered yet another injury in the playoffs this past January.

One of the most-talented quarterbakcs in the game, Wentz has seen each of the past three seasons end in injury. Sure he’s put up some tremendous numbers, but there’s a sense that he doesn’t have a great relationship with certain teammates.

Bennett, who played with Wentz in Philadelphia in 2018, might add to that narrative based on his most-recent comments.