Former Los Angeles Lakers head coach Frank Vogel is reportedly another one of the many candidates who will interview for the same job with the Utah Jazz.

Long-time Jazz head coach Quin Snyder stunned the fan base and much of the NBA world when he resigned from the position last week. His decision has sent shock waves through the organization — unsettling superstar Donovan Mitchell — as well as in the industry. Leading the talented roster in Utah is certainly a position many former and first-time coaches would covet.

Despite leading the franchise to their seventeenth championship just two seasons ago, Vogel was dismissed from his role as the head coach of the Lakers in April after finishing 33-49 and missing the playoffs in the 2021-2022 season. He is largely being used as the scapegoat for the team’s failed chemistry after they added former MVP Russell Westbrook last summer to a roster that already included Lebron James and Anthony Davis.

On Monday, the Lakers officially announced the hiring of Vogel’s replacement Darvin Ham. The long-time assistant coach recently was a part of the Bucks coaching staff and started his coaching career with two seasons in Los Angeles. 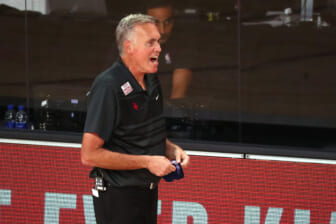 Frank Vogel was also a candidate for the head coach position with the Charlotte Hornets, however, he is not one of the finalists for the job. He has a 431-389 record as head coach over 11 seasons leading the Lakers, Orlando Magic, and Indiana Pacers.