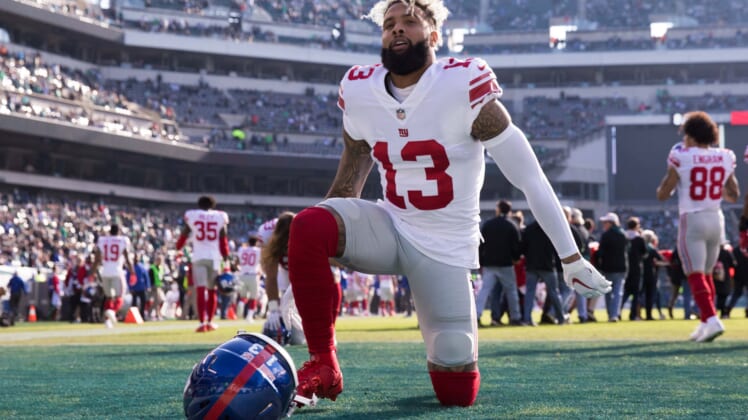 Here is what Barber had to say about the blockbuster trade that went down in March.

“I think Odell wanted to go and [general manager] Dave Gettleman and the New York Giants acquiesced,” Barber said, per Zach Braziller of the New York Post.” “He’s in a better place. And I think it may actually be OK for the Giants he’s not here.”

Barber further elaborated with this.

“He wasn’t reaching his potential. He felt like he was being constrained, either by the offensive play-calling or whatever it may have been. He wasn’t happy.”

What Barber said makes sense. OBJ did not seem like a very happy camper during the latter parts of his Giants tenure. He often acted out his frustrations on the sidelines and even got into that infamous fight with a kicking net.

Now, Beckham seems to finally be at peace with his new team. Sometimes, a fresh change of scenery is necessary for certain NFL players who have fallen out of sorts with their former teams.

In exchange for Beckham, the Giants received safety Jabrill Peppers, the 17th-overall pick in the 2019 NFL Draft and the second of the two third-round picks the Browns had in this draft.

As for Barber, he supports general manager Dave Gettleman, including the team’s pick of rookie quarterback Daniel Jones.

“If you love somebody, you take him where you can get him,” Barber said. “Whether or not Dave Gettleman knew whether or not someone was going to take him before 17 is irrelevant. They love Daniel Jones. If you ever met him or had any conversations with him like I have, you see why.”

Time will only tell as to whether this Jones pick and the Beckham trade pay off. Though at the end of the day, it would seem Barber is in the minority when it comes to Gettleman’s whole thought process.