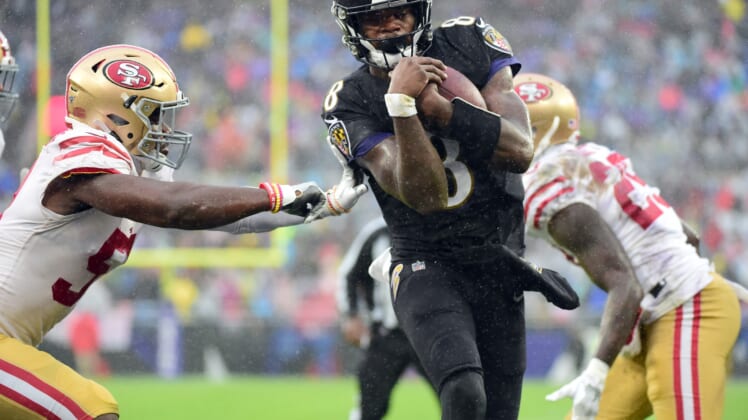 As the NFL regular season comes to an end, football fans turn their attention to the postseason. At a time when the playoff field feels more competitive than ever, the possibilities for Super Bowl LIV are exciting.

Of course, some matchups are more appealing than others. While a battle between the Buffalo Bills and Minnesota Vikings offers some interest as a wild-card Super Bowl matchup, it’s not exactly the dream scenario.

Everyone loves exciting offenses, playmaking defenses and star quarterbacks and this year offers all of it. In the AFC, the Baltimore Ravens, Kansas City Chiefs and New England Patriots each bring incredible storylines and excitement. Meanwhile, the NFC is loaded with star quarterbacks and each of them has their own level of intrigue in the pursuit of a ring this winter.

There are so many potential captivating matchups, but a few stand out above the rest. Here are the five matchups we’d most like to see in Super Bowl LIV.

It’s the game everyone remembers. The 49ers traveled to Baltimore in Week 13 and both teams put on a show for NFL fans. Each heavyweight delivered big blows to their opponent, but the other team got up every time. Finally, Lamar Jackson led the final drive to set up Justin Tucker’s game-winning field goal as time expired.

Now, imagine these teams on an even bigger stage. Jackson would play in his first Super Bowl, just an hour away from his high school. Meanwhile, Jimmy Garoppolo aims for his first title as a starting quarterback. Oh, both defenses will bring the intensity and bone-crunching hits too. It would be a fight to the final whistle. At the end, a storied franchise returns to glory.

This is the legacy Super Bowl. Tom Brady has heard all of the criticism this season, seen the comments of those doubting his ability to take this team back to the top. Even to reach this point would silence the critics, but a seventh Super Bowl ring would make him arguably the greatest champion ever.

Brees is fighting for his reputation, too. Super Bowl LIV would mark a decade since he won his first and only Super Bowl ring. Brees brought a parade to New Orleans, doing it again and knocking off the Patriots would cement his status among the game’s greatest quarterbacks. If he could add a second Super Bowl ring to his all-time passing yardage and touchdown mark, Brees can wave farewell at the podium after the game and walk off into the sunset.

Would there be a more fitting Super Bowl for the NFL’s 100th anniversary than this? A shootout between two of the NFL’s best quarterbacks and a rematch of Super Bowl I. The moment this matchup became official, the NFL would release incredible video mixing highlights from each team this season and from 1967.

Of course, this game would be about far more than history. Aaron Rodgers would have a shot at the elusive second Super Bowl ring, a stepping stone that elevates him from a top-10 quarterback ever into the top-five discussion. As for Mahomes, he could win his first title as a 24-year-old and bring the Vince Lombardi Trophy back to Kansas City for the first time since 1970.

Best of all, this game would almost certainly be a shootout where the last quarterback to have the ball wins with a score.

The storyline might not get much better than this. It’s about far more than Brady facing the team he grew up loving as a child. This would be the opportunity to face his protégé, the quarterback whose trade caused drama in New England.

Naturally, there would be plenty on the line for Garoppolo. While he might certainly be grateful that the Patriots drafted him and he got to develop and win under Brady and Bill Belichick, this team also traded him away, Taking down the quarterback who he watched so closely, picked up tendencies from and bettered himself by being around. There’s no better way for Garoppolo to write the first chapter of his legacy than by defeating Brady and ending the Patriots’ dynasty.

It’s the generational matchup everyone would love to see. It might even be nicknamed the Boomer vs. Millennial Bowl. Brees (41) and Jackson (23) will each celebrate their birthdays in January. It would be the largest age gap between opposing quarterbacks in Super Bowl history and that’s just where the fun would start.

New Orleans’ defense, which is thin on the defensive line, would likely have no answers for Jackson’s wicked elusiveness and the run-pass option scheme would cause ferocious headaches. So, the pressure is put on Brees’ shoulders to feed Alvin Kamara and Michael Thomas as often as humanly possible against Baltimore’s defense.

This would be an evening filled with big plays, in the city where Jackson grew up and Brees nearly moved to in 2005. In the end, we’d either see Brees potentially go out like John Elway or Jackson become the youngest quarterback to win the Super Bowl. Oh, the memes and jokes on Twitter would be awesome, too.