New Orleans Pelicans swingman Josh Hart will enter the open market this summer, but even as a restricted free agent, he’s reportedly determined to play elsewhere.

Cleveland.com’s Chris Fedor reported that Hart “would like a fresh start.” Making matters more complicated for New Orleans is the fact that any team who offers Hart a lucrative offer sheet can’t then become a sign-and-trade partner.

The Pels have the cap space available to retain Hart, yet they’re also going to need to pay a lot for restricted free agent Lonzo Ball if they want to keep him. With that as the backdrop, it’s worth exploring several potential landing spots that’d suit Hart the best.

Look at it this way: Julius Randle went from the Los Angeles Lakers to New Orleans, and then seemed to kick his game into another gear with the New York Knicks this past season, earning the distinction as the NBA’s Most Improved Player.

Hart shared time with Randle in LA, and was a year behind him arriving with the Pelicans. Based on how much the versatile big man thrived under Tom Thibodeau in the Big Apple, how could Hart resist a Randle-driven recruiting pitch?

The Knicks need players like Hart on the wing for depth purposes, as Thibodeau loves to play his most important players for big minutes, regardless of how his rotation is set up. Hart is a stout defender, a capable 3-point shooter and someone who offers lineup versatility.

Despite being listed at 6-foot-5, Hart averaged eight rebounds per contest this season, and 6.5 the year before, so that’s no fluke. That’s the type of high-effort, potential-maximizing mentality Thibodeau covets. It’d be awesome to see Hart in a Knicks jersey.

At the NBA trade deadline, the Toronto Raptors shipped away a dynamic wing scorer in Norman Powell, and could use someone with Hart’s skill set to help fill that void — even if they retain Gary Trent Jr., who they got in the Powell deal.

Trent is more of the instant offense type, whereas Hart better fits into the identity Raptors coach Nick Nurse promotes, which is namely fundamentally-sound basketball, built around strong defense.

Especially with forward Pascal Siakam likely to miss the start of the 2021-22 campaign, Toronto is going to need serious help crashing the boards and creating offense. Those are areas Hart can help. 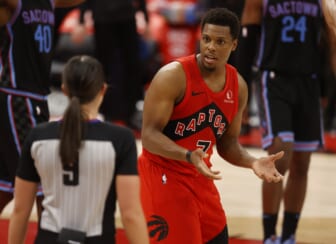 Backcourt depth is going to be at a premium for the Raptors this offseason, too. Their long-tenured, throwback floor general Kyle Lowry is hitting free agency, and is not guaranteed to return. If Hart joined Fred VanVleet and OG Anunoby on the perimeter, along with Trent, that’d be a solid group for Toronto to roll with.

That’s not to say Hart is the beginning and end of the Raptors’ free-agent hunt. There are other players they should look into who might cost more, but be better suited to help them in a significant way than Hart. We’re strictly talking here about a culture in Toronto where Hart would absolutely thrive.

Billy Donovan struggled to get the Chicago Bulls on the same page consistently enough in his maiden season with the team, and they missed the playoffs. There’s enough talent in the Windy City to be in the East’s top eight seeds, but the Bulls need some more perimeter firepower.

Again, this is a somewhat similar scenario with respect to what Hart would bring to the table in New York, under a similarly demanding coach. Chicago needs some hard-nosed, in-your-face players to complement their more finesse stars in Zach LaVine and Nikola Vucevic.

Between that duo, the Bulls should have no trouble manufacturing plenty of offense going forward. They need tenacity, defensive versatility and shooters. Those are skills Hart brings to the hardwood.

If Donovan and Chris Paul could get enough players to buy in with the Oklahoma City Thunder and make the playoffs, you can bet Donovan and LaVine can figure out how to get it done in Chicago. That said, Hart feels like a classic “glue guy” depth piece who’d fit right into the Bulls identity Donovan is trying to forge.

Something needs to change for the Dallas Mavericks. They need to find a way to get Kristaps Porzingis out of town, because he’s not clicking with superstar Luka Doncic.

Oh, and Tim Hardaway Jr. is hitting free agency, which leaves a potentially huge void in the Mavs’ backcourt rotation. That’s where Hart could fill a huge need — not to mention take on some of the rebounding load in Dallas.

Rick Carlisle is among the best coaches in the modern NBA, and Hart has never really gotten to experience that type of teaching in the pros. The Mavs are indubitably on the rise, which heightens their appeal as a free-agent destination.

Between getting coached up by Carlisle and the opportunity to play with someone who elevates teammates like Doncic does, Hart couldn’t do much better in free agency than to go to Dallas. However, the Mavs would need to figure out how to make it work, and a lot of it depends on Porzingis’ future and whether they re-sign Hardaway.