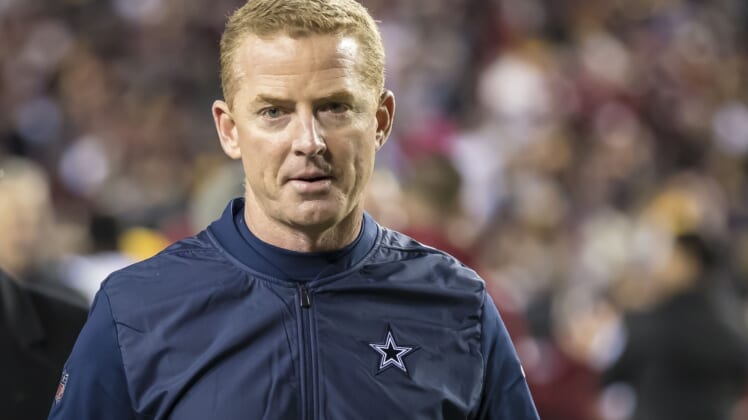 The Dallas Cowboys were already locked into the No. 4 seed heading into NFL Week 17 and really had nothing to play for except just to stay sharp.

They did that early, building up a 21-10 lead in the third quarter. Most figured that, after that point, Garrett would pull his starters to avoid any injuries. He did not do that, and early in the fourth quarter rookie linebacker Leighton Vander Esch suffered an injury.

Thankfully, it appeared he was spared anything catastrophic, but at this point in the game there really was no reason for him or any of the team’s other top starters to be playing in the first place.

Garrett’s decision to keep playing his starters did not go over well on social media.

So if the #Cowboys keep Dak in because momentum is important and then they lose to the #Giants, is it like putting a warm beer in a Styrofoam cooler and putting the cooler in the fridge?

Jason Garrett is insanely stupid. Like it's catastrophic how dumb that guy is. And Dallas is going to keep him another two years at least. You love to see it.

I’m beginning to think Garrett has a monster bonus for winning 10 games. https://t.co/69x2cArDuk

JUST MAKES ME SICK. JASON GARRETT PLAYS HIS STARTERS INTO THE 4TH Q OF A MEANINGLESS GAME … AND NOW VANDER ESCH HAS A KNEE INJURY. I KNOW HE WALKED OFF, BUT YOU CAN SEE ON HIS FACE THIS IS NOT GOOD.

The only risks Jason Garrett takes are with his players' health. https://t.co/w6JVx9oKoR

Jason Garrett just saw his star rookie linebacker, the anchor of his defense go down. You’d think the logical response is to pull his starters right? “Nah, Dak – get out there.”

Just a mind-boggling decision, but maybe there are a few “good” reasons.

Here are some possible Jason Garrett excuses for playing his starters: