Erik Spoelstra: Overturned 3 was shocking, but not why Heat lost 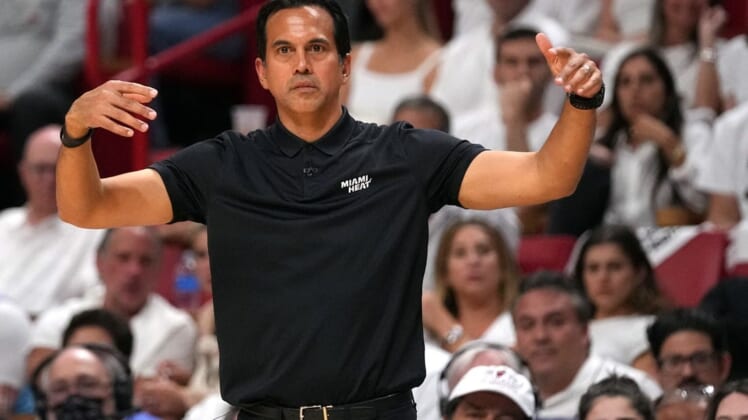 Though he avoided blaming a controversial call for his team’s loss in Game 7 of the Eastern Conference finals, Miami Heat coach Erik Spoelstra admitted he was “in shock” that the NBA replay center took three Miami points off the board during the third quarter of Sunday’s game and said it will provide a “case study” to the league.

Heat guard Max Strus knocked down a 3-pointer with 11:04 left in the third quarter of their 100-96 loss to the visiting Boston Celtics. It cut the Heat’s deficit at the time to 56-54.

But less than three minutes later in game time, the announcement came in saying the NBA’s replay center in New Jersey overturned the basket because Strus’ left foot was barely touching the sideline, making him out of bounds.

“The fact that it happened, three to four, five minutes in game time, that does change the context of how you’re playing,” Spoelstra said after the game. “We were starting to gain some momentum. You feel like it’s a seven-, eight-point game and you look up and it’s a 13-point game, and there’s no other explanation for it other than it’s gone back to the league offices.

“You feel like if it happens like that, it should happen immediately and you can adjust accordingly.”

The longtime Heat coach suggested the NBA will reexamine that decision during future league meetings.

“I’m sure they will look at that, and we’ll probably be the case study for it,” Spoelstra said. “I’m OK if it happens the way it used to. They would look at it at the next foul or break and look at it and notice it, but it was probably 10 minutes of real time — somebody check on that.

“I’m not crying or whining. Come on, we got beat. This was two competitive teams going at it. We had a crack at it at the end. Even as uneven as the game seemed, we had a crack at it. Our guys are never going to, like, not think we have a chance at it.”

Spoelstra insisted more than once that the call was “not the reason we lost,” crediting Boston for taking control early. But the momentum the Heat gained during the third quarter was slashed when they had to watch their score drop by three.

“That was so unusual for us to be grinding and then start to get some momentum, and then it was like, oh, hey, by the way, take away that 3, with no explanation,” Spoelstra said. “That’s the human side of it. That’s not the complaining side of it. Who knows if that would have changed anything, anyway.”