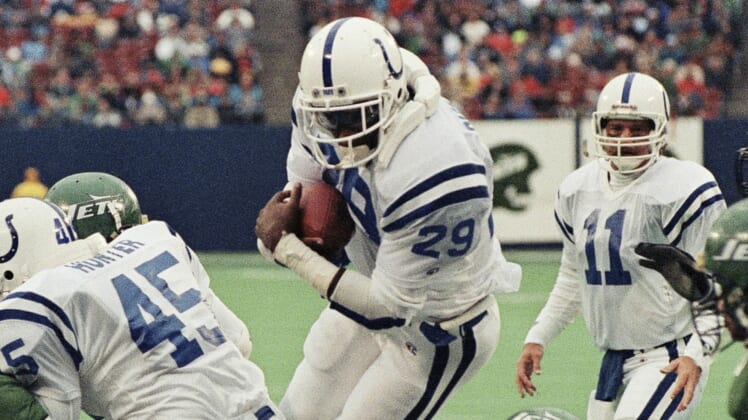 One of the biggest trades in professional sports history was made 27 years ago on Friday. On Halloween day 1987, the Los Angeles Rams traded running back Eric Dickerson to the Indianapolis Colts in a three-team deal that also included the Buffalo Bills.

All said, 10 draft picks and players were moved in this deal. Here is how the trade looked for each of the teams involved. 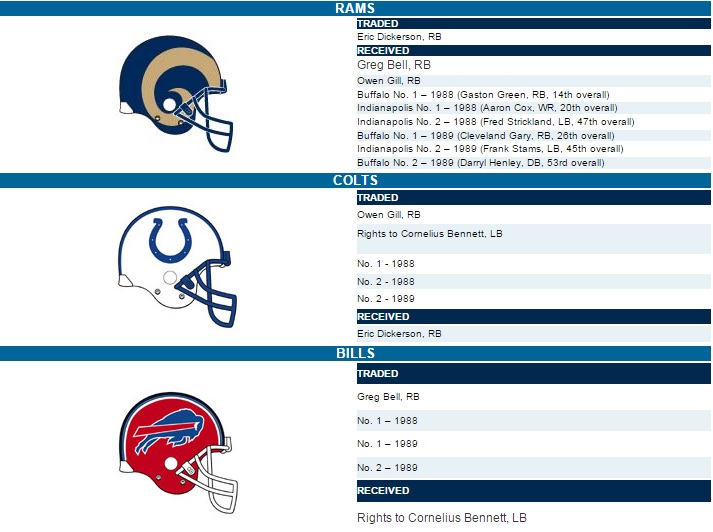 The Rams sent Dickerson, who was coming off a 1986 campaign that saw him put up over 2,000 total yards, to the Colts in a mid-season deal that enabled Los Angeles to acquire two players and a total of six first or second round draft picks.

Greg Bell, Running Back (from Buffalo): Bell, who had not done much since his rookie year with Buffalo in 1984, was a major find for the Rams in this deal. He put up over 2,600 total yards and 33 touchdowns in 1988 and 1989 before he was sent to the Los Angeles Raiders in a trade prior to the 1990 season. Bell didn’t make many friends during his two-year career with the Rams, which culminated in this deal following a lengthy holdout.

Owen Gill, Running Back (From Indianapolis): Gill played in a total of one game for the Rams. Nothing more to add to this outside of the fact that the former second-round pick from Iowa had put up just 500 rushing yards for the Colts in two seasons prior to the deal.

Gaston Green, Running Back (First-Round Pick from Buffalo): Los Angeles selected Green with the 14th pick fo the 1988 draft. And after three subpar seasons with the Rams, Green was traded to the Denver Broncos for offensive tackle Gerald Perry, who ended up starting 25 games in two seasons with Los Angeles. For his part, Green earned a Pro Bowl trip in his first season with the Broncos.

Aaron Cox, Wide Receiver (First Round Pick in 1988 from Indianapolis): Cox was considered one of the best receivers heading into the 1988 draft, but ended up bombing out in Los Angeles. In five seasons with the Rams, Cox recorded a total of 98 catches for 1,673 yards.

Fred Strickland, Linebacker (Second Round Pick in 1988 from Indianapolis): Strickland started just 27 games in five seasons for Los Angeles before moving on to the Minnesota Vikings for one year. He did, however, start 75 games for three teams between 1993-1998. Strickland’s Rams career was plagued by injuries.

Cleveland Gary, Running Back (First-Round Pick in 1989 from Buffalo): Yet another running back the Rams ended up acquiring for Dickerson, Gary had the most long-lasting impact of any of them. He led the NFL with 14 rushing touchdowns in 1990 before putting up his first and only 1,000-yard season in 1992.

Frank Stams, Linebacker (Second-Round Pick in 1989 from Indianapolis): Stams played just three seasons (16 starts) for the Rams. After moving on following the 1991 season, he was a part-time starter for the Cleveland Browns for four seasons.

Darryl Henley, Cornerback (Second-Round Pick in 1989 from Buffalo): Henley played six seasons and started 54 games for the Rams. He recorded 12 interceptions, including a career-high four in 1992.

The Colts dealt former the No. 2 overall pick in the 1987 NFL draft Cornelius Bennett to Buffalo in order to acquire Dickerson. They also moved a first and second round pick in 1988 (Aaron Cox and Fred Strickland) as well a second-round pick in 1989 Frank Stams) to the Rams in the deal.

The Dickerson story started out extremely well in Indianapolis, but it quickly turned ugly. The Hall of Fame running back tallied over 1,000 yards in nine games with the Colts to finish up the 1987 season, which helped the Colts earn their first playoff appearance in over a decade. He put up over 1,300 rushing yards the next year, but failed to lead the team to the playoffs. 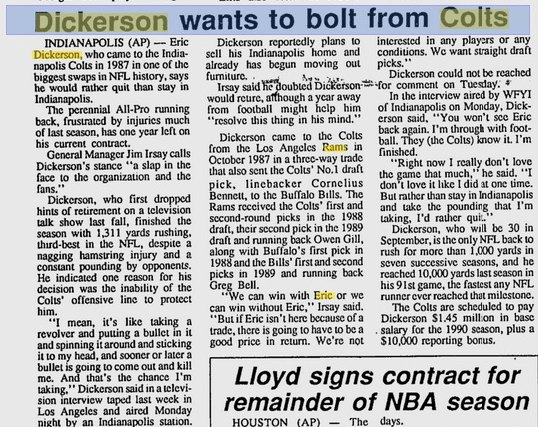 After numerous struggles from the Colts team (1-15 in 1991), Dickerson made it clear that he wanted out. Indianapolis ended up dealing him to the Los Angeles Raiders for two mid-round picks following the 1991 season. In Dickerson’s final two years with Indianapolis, he put up just 1,600 total yards and six touchdowns.

For all intents and purposes, Indianapolis failed miserably when it came to the long-term ramifications of this deal. In addition to sending multiple picks in order to get Dickerson, the Colts also traded a player in Cornelius Bennett who had a near Hall of Fame career in Buffalo.

The Bills may have paid a bounty in order to acquire Cornelius Bennett, but he was a central figure in their Super Bowl runs of the 1990’s. The linebacker earned five Pro Bowl trips in nine seasons with Buffalo, including trips to Hawaii in each season Buffalo earned the AFC Championship from 1990-1993.

And while trading Greg Bell away may have been a tough pill to swallow, the Bills running game was more than fine in the hands of Thurman Thomas, who put up eight consecutive 1,000-yard seasons and was inducted into the Pro Football Hall of Fame in 2007.