Unlike most last-place teams, the Philadelphia Eagles were not particularly bad in 2016 — they finished fourth in DVOA and tenth in weighted DVOA. Looking ahead to 2017, however, there are simply too many holes and question marks to compete with the likes of Dallas and New York.

The biggest of those question marks is Carson Wentz. His first year was widely praised, but underlying metrics were worrying. On the year, Wentz finished with 31 interceptable passes, according to Cian Fahey’s charting. Only 70.7 percent of his passes were accurate, per Fahey, the most alarming part of the stat being that Wentz rarely threw it downfield. It’s easy to blame his struggles on Philly’s awful receiving corps, and certainly some of that blame should go there. But Wentz wasn’t exactly the borderline superstar some seem to think he is.

Given that the Eagles have revamped their receiving corps this season, Wentz will undoubtedly be asked to throw downfield more often. That’s a scary prospect for someone who struggled so regularly throwing intermediate routes last season — only 65.69 percent of his throws between six and 10 yards were counted as accurate by Fahey. Even with all the help he could get from his coaching staff, Wentz was still 28th in DYAR and 25th in QBR last season. What happens when Doug Pederson tells him to let it fly?

Eagles fans are no doubt rushing to say that the receivers are better this season, which is true but only barely. The team brought in Alshon Jeffery in free agency, someone capable of superstardom when healthy.

The last part of that sentence, however, when healthy, is an important stipulation. Jeffery hasn’t played 16 games since 2014. And despite playing 12 last season, he clearly wasn’t himself. He caught only 52 of his 94 targets and had a relatively pedestrian 77.6 PFF grade. Just as part of Wentz’s struggles could be assigned to the receivers, part of Jeffery’s should be assigned to Chicago’s quarterback situation, but some is not all.

Other than Jeffery, none of the changes are especially inspiring. Torrey Smith’s best skill is drawing pass interference penalties, the importance of which is diminished with a quarterback who can’t throw deep. Mack Hollins, a fourth round pick, has great speed but not much else. Shelton Gibson, a fifth round pick, doesn’t figure to see much of the field this season. Beyond that, things remain the same in terms of personnel.

Jordan Matthews should do better as a No. 2 receiver, at least. He was always out of his element as Wentz’s top target, but in a lesser role that could change. Zach Ertz has the same talent as always, but at a certain point that has to translate into performance. 78 receptions for 816 yards is fine, but anyone projecting Ertz to shoot into superstardom should probably stop. If Nelson Agholor is in the picture, things have already gone down the drain.

It’s also tough to have confidence in the run game, which may lack an every-down back. LeGarrette Blount can run over people in the red zone, but he averaged just 3.9 yards per carry last season. Darren Sproles is a monster receiver but has never been a workhorse. He won’t become one at age 34, either. Ryan Mathews — ahead of schedule — is already dealing with an injury.

If the Eagles’ run game becomes a weapon, it will be because of their offensive line. Left tackle Jason Peters, center Jason Kelce and right guard Brandon Brooks are all among the best at their position. If he can stay on the field, so is right tackle Lane Johnson. Age could become an issue, however. Peters is 35 and gave up four sacks last season, blowing 15 pass blocks according to Football Outsiders Almanac. Kelce is 30 and coming off his worst season by PFF grading since his rookie campaign. Left guard Allen Barbre is 33 and blew 11 pass blocks last season, per FOA.

The line will make or break this offense. With Wentz expected to throw deep more often, its importance becomes paramount in the passing game as well after being minimized last season due to consistently short throws.

If things somehow hold together on the offensive side, however, the ceiling gets pretty high. The defensive line ranked second in adjusted line yards and third in stuff rate last season. More than that, it might have gotten better.

Swapping out Bennie Logan for Timmy Jernigan gets the Eagles three years younger without losing anything in terms of talent. Jernigan had an absurd 92 percent run stop rate last season, per Football Outsiders. He could be one of the best 1-techniques in the league playing with this line.

Next to him at defensive tackle is Fletcher Cox, one of the best interior pass rushers in football. In what was arguably a down year, Cox ranked fifth at his position in PFF grading, putting up 6.5 sacks, 12 hits and 29 hurries. 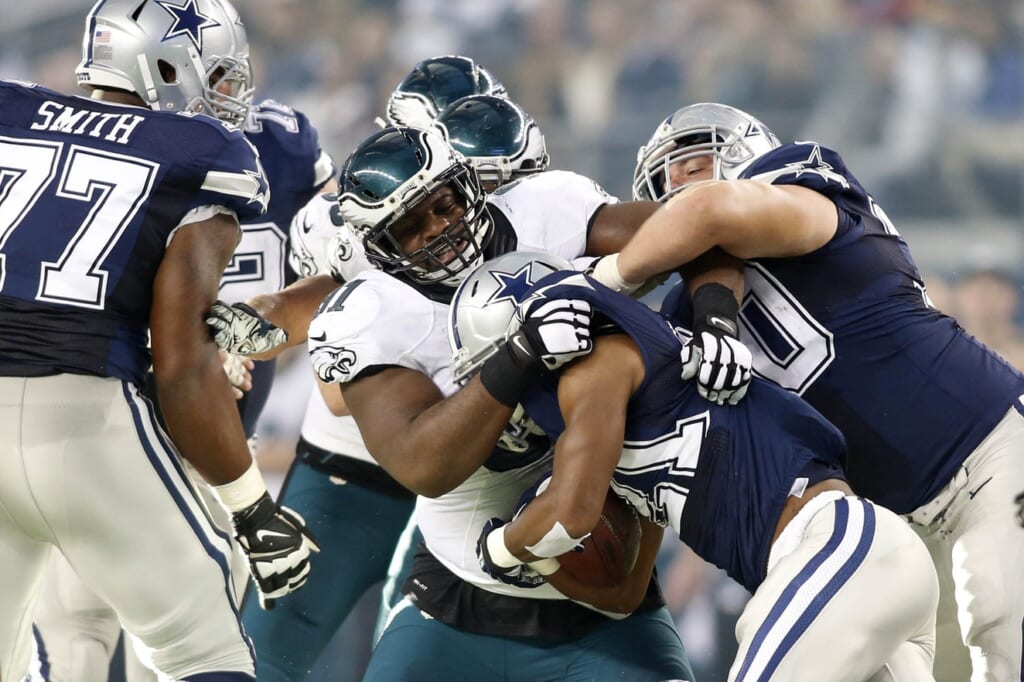 On the edges, Brandon Graham and Derek Barnett make up a terrifying duo. Graham’s 52 hurries (along with 20 hits and 5.5 sacks) ranked second in football last season, per FOA. Barnett, a rookie out of Tennessee, broke Reggie White’s sack record at the school. Pro Football Focus charting ranked him third in pass rushing productivity last year and gave him a 92.0 overall grade. Barnett still needs to develop another move beyond his speed rush, but that alone will get him places.

Among linebackers, both Jordan Hicks and Nigel Bradham were in the top-10 of PFF grading last season. Hicks makes his bones in coverage, ranking second among LBs in success rate at 70 percent, per FOA. Bradham was in the top-20 in that stat, as well as run stop rate. Mychal Kendricks figures to see more playing time this year and could be a liability in coverage, but like all teams, the Eagles mostly play nickel. Kendricks may only be on the field for the 30-percent of the plays Philadelphia is in its “base” 4-3, so it’s unlikely he makes a huge impact.

The only questionable area on this defense is at cornerback. Jalen Mills was a bona-fide disaster in his rookie season — his 31.8 PFF grade was 110th among cornerbacks. Patrick Robinson and Ron Brooks — one of whom will likely become the slot corner — had grades of 45.1 and 40.9, albeit with only 13 games played between them. Third-round pick Rasul Douglas figures to be a solid piece in zone, which the Eagles played about two-thirds of the time, according to PFF. However, his man-coverage ability is more of a question mark. Unless second-rounder Sidney Jones comes back sooner than expected from a torn Achilles sustained at the NFL Combine, this group will struggle.

The safety duo is good enough to make up for some of the mistakes. Malcolm Jenkins is one of the best box safeties in football, ranking 13th at his position in success rate, per FOA. Free safety Rodney McLeod isn’t a star, but he can get the job done.

All things considered, the ceiling for this team is solid. Even though we’re predicting a last-place finish, the Eagles could win the division and it wouldn’t be a massive surprise. However, there simply aren’t enough sure things to come into the season feeling good. The defensive front seven is great. As for everything else, who knows?

It’s hard to be confident in Wentz, the running game and the receiving game (outside of Jeffery). The corners will be bad again, barring a massive improvement from Jalen Mills.

More than that, the Eagles are due for injury regression. In adjusted games lost — a Football Outsiders metric examining injuries weighing importance by position — the Eagles ranked third on the offensive side and fifth on the defensive side last season. That’s unlikely to last. With Darren Sproles aging, it’s also tough to see them being so strong on special teams again.

Add all of that up, along with the quality of their division, and it’s hard to see the Eagles coming close to that ceiling. Another 7-9 season, this time accompanied with questions about Wentz’s long-term viability, feels more likely.