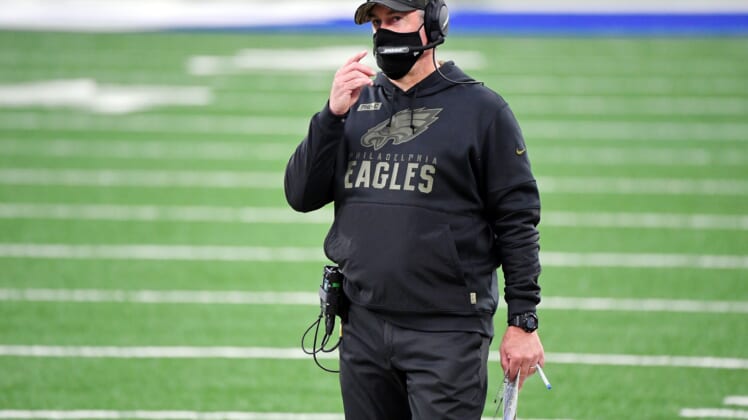 Entering their Week 9 bye with a 3-4-1 record, sitting atop the NFC East, many believed additional practice time would fix this team’s issues on offense. Instead, the Eagles have lost three consecutive games and scored just 17 points in each of them.

Coming off another rough showing by Wentz and Co. in Week 12 against the Seattle Seahawks, it seems changes might finally be coming to Philadelphia.

While the Philadelphia Eagles have struggled offensively for much of the season, the issues have been particularly alarming in recent weeks. Between the team’s decision to largely abandon the running game and a lack of continuity on the field, things have gotten ugly.

According to The Philadelphia Inquirer‘s Jeff McLane, Doug Pederson has allowed pass game coordinator Press Taylor to call some plays in recent weeks. When the team is in two-minute situations, offensive assistant Rich Seangarello has called plays since the start of the season.

Pederson acknowledged after Monday night’s loss that giving up play-calling duties would be considered. As the Eagles prepare for their Week 13 matchup against the Green Bay Packers, per McLane, Pederson plans to give Taylor more play-calling opportunities moving forward.

Related: 5 quarterbacks who could replace Carson Wentz in 2021

Sunday’s game is the perfect opportunity to turn things around offensively. Green Bay’s defense allows opponents to average 4.6 yards per carry, the eighth-highest average in the NFL. This would seemingly be the moment for Philadelphia to unleash its running game.

There was speculation before the season that Pederson reached his ceiling as a head coach. Among the concerns many had regarding this team’s future, the number of voices who were directing Wentz and trying to guide this season. Unfortunately for fans in Philadelphia, the worst-case scenario is now playing out.

After putting himself in the NFL MVP consideration during a breakout 2017 season, Wentz has slowly regressed. He still played fairly well in 2019, posting a 27/7 TD/INT ratio with 4,039 passing yards, but his 17.8% bad-throw rate was alarming.

Wentz’s issues have spiraled even further out of control this season. He leads the NFL in sacks (46), interceptions (15) and ranks 27th in ESPN’s QBR (49.6). Among quarterbacks with 300-plus pass attempts, he has the lowest completion rate (58.1%) and the second-lowest yards per attempt (6.0).

Despite his evident issues and horrific decision-making, Wentz has attempted 117 passes in Philadelphia’s last three losses. He has completed just 57.2% of those attempts with a 4/3 TD/INT ratio and averaged 5.62 yards per attempt.

Fans have been begging for Jalen Hurts, who Philadelphia invested a second-round pick in this offseason, to get more opportunities. The rookie received more first-team reps in practice before Week 12 and was seemingly headed for an expanded role. He completed one pass against the Seahawks, but played just two snaps.

The blame can’t entirely fall on Philadelphia’s offensive line. According to Pro Football Focus, Wentz has the second-lowest quarterback rating (83.5) when kept clean and a league-leading 10 interceptions when not pressured.

Whether it’s Pederson or quarterbacks coach Press Taylor calling plays, this offense needs to change. Philadelphia’s offense is averaging the fourth-fewest rush attempts per game (23.2) over the past three games, but they lead the NFL in yards per carry (5.4) over that span.

It’s time for the Eagles to center their offense around Miles Sanders. He is averaging 5.6 yards per carry this season and deserves 20-plus touches against the Packers. If the Eagles can take a more run-heavy approach and move Wentz out of the pocket more, this might look like a legitimate NFL offense.