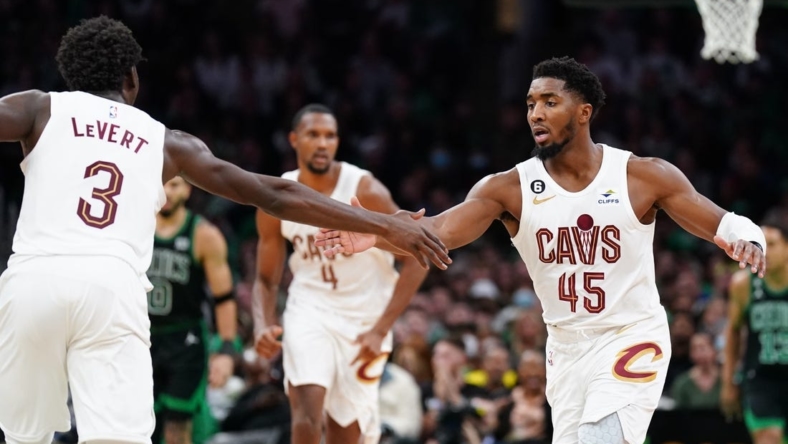 Donovan Mitchell spent portions of the summer thinking he was headed to the New York Knicks in a blockbuster trade before getting dealt to the Cleveland Cavaliers on Sept. 1.

So far, Mitchell is off to a fast start with his new team and coming off their impressive win of the season, the Cavaliers attempt to keep the good times rolling Sunday night when they host the Knicks.

At 4-1, Cleveland is off to its best start since opening the 2016-17 campaign with six straight wins and Mitchell has averaged 31 points per game so far. The Cavaliers head into their first meeting with the Knicks hitting 41.7 percent of their 3-pointers and are on a four-game winning streak after rallying for a 132-123 overtime win at Boston on Friday.

Mitchell scored 41 points and has topped 30 in four of his first five games. His latest dynamic performance occurred as the Cavaliers overcame a 13-point halftime deficit and dominated overtime thanks to Caris LeVert.

LeVert scored 11 of his 41 in overtime when the Cavs made five of their seven shots and outscored Boston 18-9. Cleveland also held the Celtics to 24 points and 33.3 percent shooting (8 of 24) combined in the fourth quarter and overtime.

“I didn’t know what to expect,” Mitchell said. “I knew we had a great group of guys. I knew we had great basketball players. But sometimes those things take longer. For us to go out there and get a bunch of solid, gritty, hard-fought wins, that brings you much closer.

“I think we’re farther along than we expected at this point, but the great teams do it on a nightly basis. Celebrate this. Enjoy it. Have fun with it. Back at it Sunday.”

The Knicks were linked to Mitchell — who grew up in the New York area and whose father works for the New York Mets. The rumors persisted even after the Knicks signed Jalen Brunson to a four-year, $104-million contract on July 12.

So far, Brunson is off to a productive start with 18.6 points per game. Brunson and the Knicks are coming off their least productive showing of the season as their three-game winning streak was stopped in a 119-108 loss at Milwaukee on Friday where their only lead occurred briefly in the final minute of the first quarter.

After rolling to a blowout win over Detroit on Oct. 21, and earning wins over Orlando and Charlotte, the Knicks shot a season-low 39.8 percent Friday but still had a chance to steal a win. After falling behind by 24 points in the third quarter, the Knicks chipped away and were within 11 in the fourth quarter as Milwaukee missed 12 straight shots.

“We started out really slow. A lot of that’s on me,” Brunson said. “I’ve got to do a better job with just coming out and attacking, being who I am. I take full credit for that. I’ve got to come out with intensity and tenacity like I usually do. We were just playing behind, catch-up, all game long.”

Besides starting faster, the Knicks are hoping to get better efficiency from their key players. RJ Barrett led New York with 20 points against the Bucks but missed six of seven 3-point tries. Julius Randle and Brunson each shot 3 of 10 from the floor.

Cleveland has won the past three meetings and eight of the last 13. The past two meetings in Cleveland were decided by a combined five points.