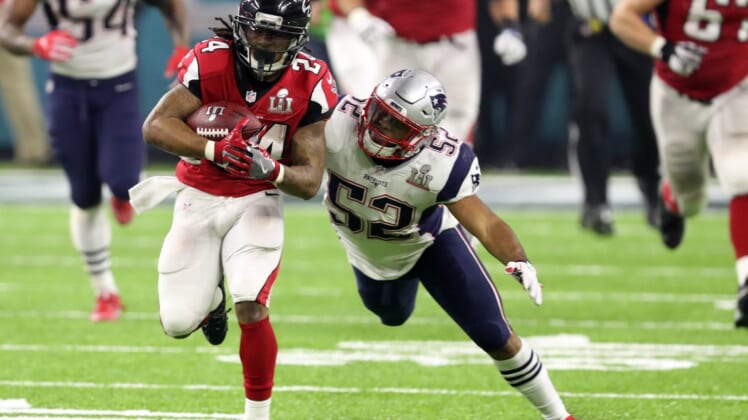 After months of negotiations and even some public wrangling from both sides, the Atlanta Falcons and Pro Bowl running back Devonta Freeman came to terms on an extension Wednesday.

The deal makes Freeman the highest-paid running back in the NFL. It calls for $41.3 million over five seasons, including $22 million in guaranteed cash.

Freeman, 25, definitely deserved a raise after putting up 3,175 total yards and 27 touchdowns over the past two seasons. After all, he was set to earn less than $2 million this year.

The defending NFC champions deciding to take care of their own can’t be seen as a bad thing. That’s until we come to the all-too-familiar conclusion that the NFL has a hard cap. Teams simply can’t afford to pay top-end cash to players at an abundance of positions and expect to be well-rounded over the long term.

Atlanta itself is a prime case study here.

In fact, these three will count nearly $48 million against the cap in 2018. Add in Jake Matthews’ $12.5 million cap number and the $10.8 million fellow offensive lineman Alex Mack will earn, and that’s $71 million committed to just five players.

With the cap having hit $167 million this year, that’s almost half of the team’s financial flexibility tied up to five players. This doesn’t even take into account the hefty raise Freeman himself received.

Atlanta earned the NFC title primarily due to the performances of the players we mentioned above. That much isn’t in question. But the team’s young players and depth also played a vital role.

Vic Beasley, who the team selected in the top 10 of the 2015 NFL Draft, led the league with 15.5 sacks a season ago. Another performance like this in 2017, and he will surely come calling about a lucrative extension that would pay him among the best EDGE pass rushers in the game.

Fellow defenders Ra’Shede Hageman, Deion Jones and Jalen Collins will also be looking for long-term security here over the next couple years.

The problem with giving Freeman $41-plus million is more than simply looking at financial allotment when it comes to the team’s roster. It’s also about an on-field philosophy that has not relied on one running back to get the job done.

Sure Freeman put up 1,500-plus yards for the second consecutive season. He also averaged just 14 rush attempts per game while sharing duties with fellow youngster Tevin Coleman. For his part, Coleman gained 941 total yards and 11 touchdowns as a sophomore.

Coleman is also not set to hit free agency until after the 2018 season, at which point the Falcons will be hard-pressed to find room under the cap to retain him.

At 5-foot-8 and 208 pounds, Freeman entered the NFL as a potential change-of-pace back. It’s one of the primary reasons he lasted until the fourth round of the 2014 draft. After all, here’s a guy that averaged just 10 rush attempts per game during his three-year career with Florida State.

Without a track record of being able to shoulder the burden of a three-down role, the Falcons are surely placing long-term faith in Freeman somehow morphing into that type of running back. In his six seasons in both college football and the NFL, Freeman has yet to prove that he can be that guy.

Atlanta remains one of the most-talented teams in the NFL. That won’t change in 2017. But further down the line, it’s quite possible the team could rue the day it signed Freeman to what has to be considered a well-deserved extension.