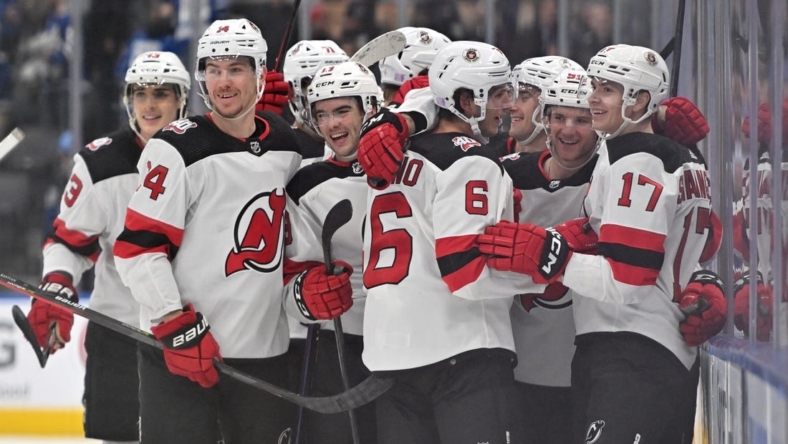 The New Jersey Devils are playing so well that even none of their three championship teams started this quickly.

Off to their best 17-game start in franchise history, the Devils seek their 12th straight win Saturday afternoon when they visit the Ottawa Senators.

The Devils are on their second-longest winning streak in team history, matching an 11-game run they enjoyed from March 28 to April 18, 2006. New Jersey is two away from matching the longest run in team history set from Feb. 26 to March 23, 2001.

New Jersey also is 14-1 in its past 15 games after dropping its first two contests to Philadelphia and Detroit. The Devils outscored opponents 19-5 in the first four games of the streak and since then they have won five one-goal games, including three in overtime.

The latest was Thursday’s 3-2 thriller in Toronto when Jack Hughes set up Yegor Sharangovich’s game-winner 57 seconds into overtime. Nico Hischier and Jesper Bratt also scored for the Devils while Vitek Vanecek won his eighth straight game by making 25 saves.

New Jersey’s latest win featured continuation of hot streaks by Hughes, Bratt and Hischier. Hughes has 15 points in the past 11 games, Bratt has 12 points and Hischier has 11 — and the Devils are 12-0 when he gets a point.

“Just how fun it is to come to the rink and work on details and work as a group to get better,” Hischier said.

The latest victory also gave coach Lindy Ruff the longest winning streak of his career after he began the season by hearing chants calling for his firing in the home opener.

One of New Jersey’s dramatic victories was its 4-3 overtime home win over Ottawa on Nov. 10 when Hischier scored a power-play goal on a deflection in the final minute after the Senators scored the tying goal early in the third.

Since losing the first meeting, Ottawa has sandwiched a pair of 4-1 victories around a 4-2 loss to the New York Islanders. The Senators are 2-7-1 in their past 10 games after snapping a five-game home losing streak by beating Buffalo on Wednesday.

“This brings us a lot of confidence,” Forsberg said. “We’ve just got to keep building on it. Trust the process, our game and keep working on