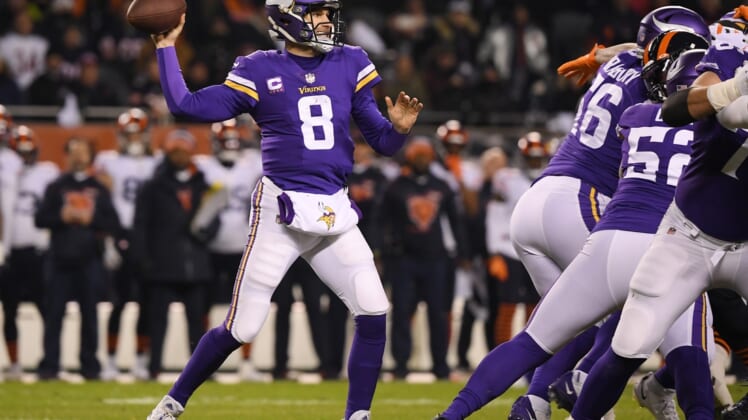 Kirk Cousins threw two touchdown passes and the Vikings’ defense took care of the rest as Minnesota continued its playoff push with a 17-9 victory over the host Chicago Bears on Monday.

Cousins completed 12 of 24 passes for 87 yards — the fewest in a start in his career — and an interception for the Vikings (7-7), who have won two straight games following a two-game slide that had them on the brink of being eliminated from playoff contention.

Dalvin Cook gained 89 yards on 28 carries for the Vikings, who amassed just 193 yards of total offense.

The Vikings, despite yielding 370 yards, prevailed by blocking a field goal, recovering three Chicago fumbles, holding the Bears to go just 2-for-12 on third-down conversions and forcing three turnovers on downs, including two inside the Minnesota 15-yard line.

Justin Fields went 26 of 39 for 285 yards and a touchdown and David Montgomery added 60 yards on 18 carries for the Bears (4-10), who lost their third straight game and fell for the eighth time in nine contests.

The Bears’ lone touchdown came on the game’s final play, when Fields threw a 19-yard strike to Jesper Horsted.

The Vikings took a 7-0 lead when Cousins’ 12-yard touchdown toss to Jefferson in the corner of the end zone capped an eight-play, 54-yard drive with 5:03 left in the first quarter.

After Fields fumbled on the Vikings’ 47-yard line on the Bears’ ensuing possession, Minnesota extended its lead to 10-0 on Greg Joseph’s 37-yard field goal with 13:28 left in the half.

The Bears got on the board with Cairo Santos’ 34-yard field goal with 1:33 left in the second quarter. Chicago could have pulled closer at the half following an interception by Deon Bush, but Santos’ 49-yard field-goal attempt fell short after Dalvin Tomlinson deflected it at the line of scrimmage.

The Vikings put the game away, with the Bears’ help, on their first possession of the second half.

Minnesota took advantage of two 15-yard penalties by the Bears on third-down plays to prolong a 12-play, 77-yard drive that ended with Ihmir Smith-Marsette scoring the first touchdown of his career. The rookie caught Cousins’ 7-yard pass for a 17-3 lead with 5:51 left in the quarter.