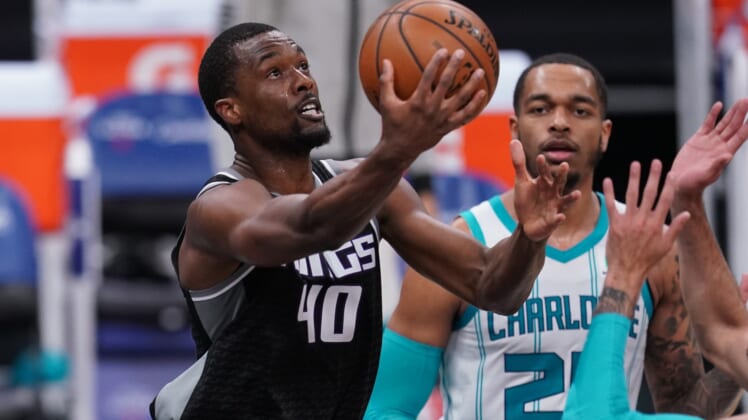 In the midst of a strong stretch of action, the Denver Nuggets are looking to upgrade behind MVP candidate Nikola Jokic and stud guard Jamal Murray ahead of Thursday’s NBA trade deadline.

We’ve heard rumors linking the 25-17 Nuggets to Orlando Magic star forward Aaron Gordon. That makes sense given Gordon is firmly on the trade block with the Magic reportedly heading into a full-scale rebuild.

Now comes this note from Mike Singer of the Denver Post indicating that the Denver Nuggets are also in on Sacramento Kings forward Harrison Barnes.

“Two days before the trade deadline, the Denver Nuggets have identified a new potential target to fill a gap on the wing: Sacramento’s Harrison Barnes,” Singer noted on Tuesday.

Much like Gordon, Barnes has been on the trade block for some time now. He’d also be a nice under-the-radar addition for a contending team.

The former top-seven pick is in the midst of the most-efficient performance of his nine-year career. Barnes, 28, is averaging 16.3 points, 6.5 rebounds and 3.7 assists on 50% shooting from the field. The three-and-D wing is also shooting 37% from distance while playing strong defense out on the perimeter.

How would a Harrison Barnes trade to the Denver Nuggets look?

It’s unclear what the Kings’ asking price in a Barnes trade might be. It’s also not yet known whether Sacramento front office head Monte McNair is looking for draft pick assets, young player(s) or a combination of the two. At 18-25, the Kings’ intentions remain up in the air.

Barnes’ value could be determined by his performance throughout the 2020-21 campaign and the fact that the underrated forward is due a mere $38.7 million over the next two seasons. For someone of his ilk, that’s a pretty big bargain by today’s NBA standards.

The Denver Nuggets are said to be interested in dealing struggling 26-year-old guard Gary Harris. Given their salary cap situation, he would likely have to be involved in any potential Harrison Barnes trade.

Even then, the Kings would want other assets as centerpieces in a hypothetical trade. Here’s how something might get done between the two sides.

Read More: How an Aaron Gordon trade to the Denver Nuggets might look

Denver has reportedly already offered up Bol Bol in a package for New Orleans Pelicans star guard Lonzo Ball. Nothing has yet to come to fruition on that end. He could be of interest to a Kings team that’s looking for a young center. Acquiring a first-round pick would help in this regard, too.

As for the Denver Nuggets, this deal would make a whole lot of sense. Barnes could slide in at the small forward position with Will Barton and Jamal Murray teaming up in the backcourt. Add in the combination of Nikola Jokic, Michael Porter Jr. and Paul Millsap in the low-post, and this would be a championship-contending core.

Remember, Denver made a shocking run to the Western Conference Finals a season ago. After some initial struggles throughout the start of the 2020-21 campaign, Mike Malone’s squad has won eight of its past 10.

The expectation here is that general manager Tim Connelly will look to get something of substance done ahead of Thursday’s NBA trade deadline. Whether that means bringing in Harrison Barnes remains to be seen.