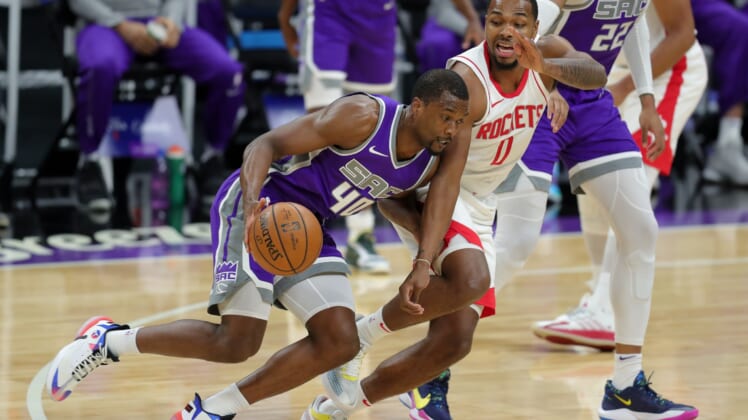 The NBA trade deadline is approaching fast and Harrison Barnes is at the center of rumors, with the Boston Celtics connected to the veteran forward more than any other team. With the Sacramento Kings plummeting down the NBA standings, a big move becomes even more likely.

Even when Sacramento played surprisingly well early in the season, the Celtics were keeping a close eye on the situation. Boston wanted Barnes and while general manager Danny Ainge has been relatively quiet at recent trade deadlines, NBA rumors hinted at something big looming before March 25.

Related: This is how a Kyle Lowry trade to the Philadelphia 76ers might look

With the Kings now expected to be sellers, the Celtics should be ready to pounce. There isn’t a ton of marquee talent available this time of year, with top players like Bradley Beal, Zach LaVine and Nikola Vucevic staying with their respective teams. So, if Boston wants to compete for a shot at the NBA Finals in 2021, it must strike on the best option available.

Let’s examine why Harrison Barnes is a perfect fit for the Celtics and what it might cost to trade for him.

If the Celtics had their choice, they would land a massive upgrade at center by acquiring Vucevic. Unfortunately for Boston, Orlando isn’t interested in trading its All-Star center. Even if the Magic were open to the idea, Boston doesn’t really have the high-end assets to pull off that blockbuster trade.

Everyone around the NBA, from opposing teams to the Celtics’ fans, recognizes this team needs help along the wing. Boston made a huge offer for Jerami Grant, but the Detroit Pistons aren’t ready to move him just months after signing him. Plus, while the Pistons are rebuilding, Grant likes what is being built and trusts the general manager and coach. So, the focus shifts to Barnes.

The Celtics are looking for an athletic wing capable of playing either forward spots. Just as importantly, they want a capable scorer who can shoot from the outside, provide quality defense and is also able to distribute the basketball to playmakers around him. Barnes is a match for each of those criteria and he brings championship experience, which Boston’s lineup lacks.

Sacramento’s 28-year-old forward is averaging 16.8 points, 6.2 rebounds and 3.5 assists per game this season. Those are quality numbers from the No. 3 option on a team, but it’s the efficiency that matters. Barnes is shooting a career-best 49.4% from the field this season and is consistent from beyond the arc (38.4%, 1.6 three-pointers made per game). He’s even better with his corner 3s, sinking 43.2% of his shots from either side this season.

Barnes is also a reliable distributor, which the Celtics would welcome alongside Jayson Tatum and Jaylen Brown. The 6-foot-8 forward boasts an impressive 13.3% assist rate on the season. On the defensive end, per NBA.com, opponents shoot 39.4% from within 20-24 feet when guarded by Barnes. While his defensive rating is low, that’s the result of being surrounded by a roster that gives atrocious effort and often fails to execute the basic defensive fundamentals.

The Celtics are looking for that additional option who they can depend. Barnes isn’t an All-Star, but that’s not what anyone expects. He is as reliable as they come, with skills and savvy that this club needs to pair with its young stars. Now, it all comes down to what Harrison Barnes would cost.

What would it cost the Celtics to land Harrison Barnes?

Related: This is how a Kristaps Porzingis trade to the Miami Heat might look

One of the biggest hurdles that often prevent blockbuster trades is contracts. While salaries don’t need to match perfectly, it’s especially important for contenders to stay compliant with the NBA salary rules. The Celtics are currently $7.7 million over the cap but $15.5 million under the luxury tax. One thing they do have is a unique asset to facilitate a deal.

Thanks to the offseason Gordon Hayward sign-and-trade, Boston owns a $28.5 million trade exception. It will expire on Nov. 28, so the front office will want to take advantage of it within the next few months. In the case of a Harrison Barnes trade, the Celtics can easily absorb his $22.21 million salary this season into the exception. So, the focus for us shifts to asset compensation for Sacramento.

There will be some competition from other contenders, namely the Miami Heat. Many contenders, especially in the Eastern Conference, would love to add Barnes to their starting lineup. Multiple bidders create obvious leverage for the Kings, but Boston’s ability to retain Barnes’ entire salary is an advantage. With that said, it will still require a significant return to land him.

A trade package will need to start with a young player who can slide into Sacramento’s rotation, one with upside and multiple years of contract control. Boston offers a wide selection, depending on what position the Kings prefer. Robert Williams III is only a 6-foot-8 center, but his per 36 minutes stats (15.1 ppg, 12.9 rpg and 3.6 bpg) are off the charts. He would be a great rotational big for the Kings, benefiting from an expanded role.

Sacramento could also choose from Aaron Nesmith or Payton Pritchard. Nesmith, a 6-foot-5 guard, was the No. 14 pick in the 2020 NBA Draft. He’s an outstanding shooter and could be the replacement for Buddy Hield, if the Kings also trade him. Pritchard, the No. 26 overall pick, would be an exciting, young guard to come off the bench behind De’Aaron Fox. If the Kings trade Hield, Pritchard could step in as a sixth man with Tyrese Haliburton becoming the starting shooting guard.

Ultimately, the Kings will want one of those three players and a 2021 first-round pick from the Celtics. While sending Pritchard, an unprotected 2021 first and some future second-round picks might feel a bit much for some fans, Barnes fits everything the team needs. The Kings and Celtics are the perfect trade partners this season and it wouldn’t be a surprise if a Harrison Barnes deal happens by March 25.