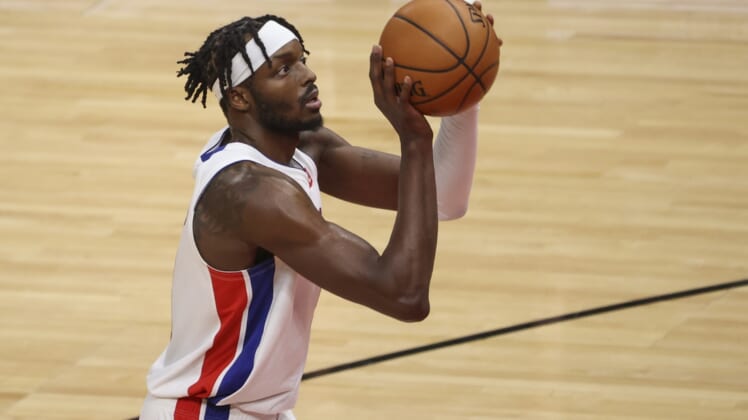 Boston Celtics rumors continue to point in the direction of them adding ahead of the March 25 NBA trade deadline. General manager Danny Ainge is specifically looking at a forward who can play multiple positions and replace the production Boston saw from Gordon Hayward over the past couple seasons.

That could potentially include landing top NBA Most Improved Player candidate Jerami Grant from the rebuilding Detroit Pistons. At the very least, Boston has made a strong play for the forward.

“I believe the Celtics have offered multiple first for him (Grant). I don’t know what multiple means. It could be two. It could be three,” James Edwards of The Athletic noted.”

The Boston Celtics interest in Grant is not surprising. He’s in the midst of a banner season for the otherwise downtrodden Pistons. Grant, 26, is averaging 23.4 points and 5.3 rebounds while playing elite-level defense from both the three and the four thus far this year.

Boston is in need of more firepower in the frontcourt with Tristan Thompson and Daniel Theis manning the four and five, respectively. The two are averaging a combined 17.2 points on the season. That’s just not going to cut it.

Realistically, Grant could slide in at the four with Thompson taking over at center and Theis moving to a bench role. He seems to be more than in over his head as a starter.

How would a Jerami Grant trade to the Boston Celtics look?

Edwards noted that Boston has already offered up at least two first-round picks for Grant. This would likely be the baseline for any deal. With that said, he’s a highly valuable commodity heading into the NBA trade deadline.

Not only is Grant a three-and-D forward, he can play multiple frontcourt positions. Given his improvement as a scorer this season and team-friendly contract (due $40.59 million over the next two seasons), the Pistons are likely to receive a boatload for him if the rebuilding teams opts for a trade. Here’s a look at what a trade to the Celtics might look like.

Under this scenario, the Boston Celtics use the trade exception they acquired in the Gordon Hayward offseason deal with the Charlotte Hornets. It would also seem to be a mighty high price to pay for Grant. Then again, his value dictates a massive haul for Detroit.

By making this move, the Celtics would have an elite-level starting five of Kemba Walker, Jaylen Brown, Jayson Tatum, Jerami Grant and Tristan Thompson. It would also create a ton more depth in the backcourt.

The Celtics currently find themselves at 19-17 on the season. Ainge has made it clear he wants to improve an underperforming roster that earned a trip to the Eastern Conference Finals a season ago.

That continues to lead to widespread speculation that a blockbuster move of this ilk could be in the cards over the next two weeks. Whether it’s Grant or someone like Harrison Barnes, expect something to come to fruition.