The Miami Heat are showing interest in Sacramento Kings forward Harrison Barnes, per reports. What would the Heat have to give up for the 28-year-old forward? 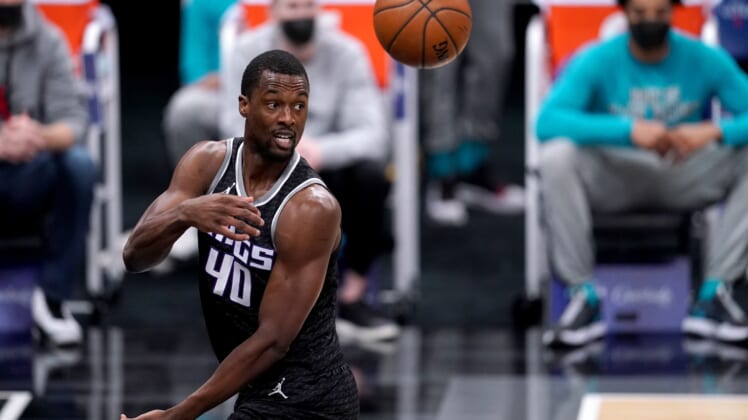 The Miami Heat play their final game before the All-Star break on Thursday night when they face the New Orleans Pelicans on TNT. Miami was on a six-game winning streak before losing to the Atlanta Hawks on Tuesday night.

However, the Heat’s recent success shouldn’t blind them from the issues with the team’s rotation. They still don’t have a player to fill the Jae Crowder role, which was supposed to be Moe Harkless’ job. In light of this, the Heat are showing interest in one of the top forwards on the trade market.

According to FortyEightMinutes’ Sam Amico, the Miami Heat may be one of the teams interested in Sacramento Kings forward Harrison Barnes. The 28-year-old forward is averaging 16.7 points, 6.1 rebounds, and 3.6 assists in 35.7 minutes per game this season.

Miami Heat rumors: What would a Harrison Barnes trade cost?

While some Heat fans may not be happy with Achiuwa being involved in a deal, he could be the Heat’s best tradable piece since they don’t want to trade Tyler Herro unless it’s for a player they deem fitting for his price.

Trading for Barnes would take away $22.22 million from the Heat’s cap space this summer, which would leave very little money left to spend on someone like Victor Oladipo. It would also raise questions on whether they would extend Kendrick Nunn, Duncan Robinson, both of them, or neither.

What would Harrison Barnes bring to the Miami Heat?

Harrison Barnes’ offensive and defensive ratings are skewed due to those statistics leaning toward more team play. Barnes has a 116.7 defensive rating, which is not very good compared to other players, however, every defensive rating on the Sacramento Kings roster is high.

The eye test for Barnes shows way more than the statistics that he has connected to him. Barnes plays solid defense that could really help the team at the four position with his height at 6 feet and 8 inches. However, his offense is better than his defense and that is something they need on nights where others can’t score.

The forward is averaging 16.7 points while shooting 49.2% from the field, which would be a career-high in the 10 years he has been in the NBA. Barnes’ field goal percentage would be the fourth-best on the Miami Heat, only behind other big men on the team.

Barnes is also shooting 39.4% from behind the arc for the Kings. That would rank higher than Duncan Robinson, who is shooting 39.2% from the three-point line. Barnes is a very underrated scorer and he can create his own shot, unlike Robinson who relies on his off-the-ball movement.

The Heat struggle on offense when Jimmy Butler is out of the game and adding another scorer is exactly what the team needs. A move for Barnes would most likely be the best possible move the team can make if they can trade for him at a reasonable price.

Miami could roll out a lineup of Kendrick Nunn, Duncan Robinson, Jimmy Butler, Harrison Barnes, and Bam Adebayo, which would be very solid and take them to a new level on the offense end specifically.

Rumors are starting to heat up with the trade deadline approaching. The Miami Heat have been interested in Barnes’ teammate Nemanja Bjelica and San Antonio Spurs forward Rudy Gay. Miami will be active at the deadline as they look to bring more consistency to the team for another NBA Finals run.