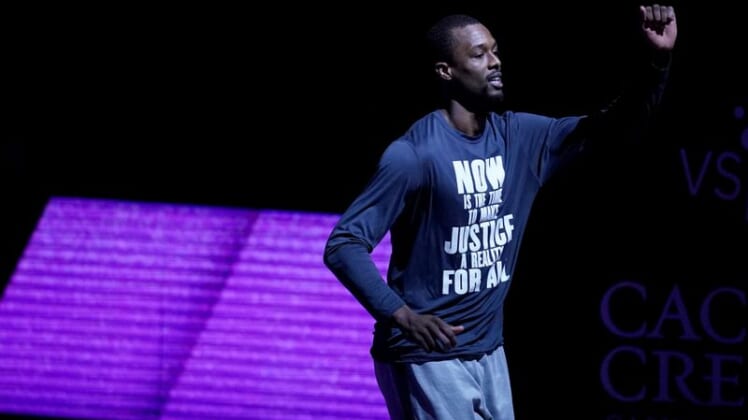 It’s already known that the Boston Celtics are looking to buy ahead of the NBA trade deadline. Sacramento Kings forward Harrison Barnes could also be moved from California’s capital city.

It stands to reason that the two would be linked to one another with Boston in need of help out on the wing. That came to fruition late last week with reports that the Celtics were interested in Barnes.

Nowhere near the star player many had imagined Barnes being early in his career with the Golden State Warriors, he’s still a tremendous asset to have. The 28-year-old forward is in the midst of a tremendous season that’s seeing him average 15.8 points, 6.2 rebounds and 3.4 assists on 48% shooting from the field. He’s also a plus-level defender.

From the Boston Celtics perspective, adding Harrison Barnes to the mix would enable star Jayson Tatum to move to a small-ball four. That’s an upgrade over what Brad Stevens’ squad has right now.

As for the Sacramento Kings, it’s starting to make sense for Luke Walton to go with a three-guard lineup now that Tyrese Haliburton is in the NBA Rookie of the Year conversation. Teaming the Iowa State product up with Buddy Hield and super-star guard De’Aaron Fox in the starting lineup would work well.

Below, we look at how a deal between the Celtics and Kings would work.

How a Harrison Barnes trade to the Boston Celtics might look

Boston boasts the $28.5 million Gordon Hayward trade exception. If the Kings are simply looking to cut payroll, that could act as the centerpiece coming back to Sacramento. Barnes is set to earn a combined $38.6 million over the next two seasons.

A deal of this ilk likely would include a young player and a second-round pick heading back to the Kings. Aaron Nesmith, Grant Williams, Robert Williams and Carsen Edwards would all be options.

However, there’s a chance that Sacramento will want proven assets from the Boston Celtics in a Harrison Barnes trade. Remember, the team is firmly in the Western Conference Playoff race.

Under this scenario, Marcus Smart and Tristan Thompson would likely accompany draft pick assets going back to the Kings. If Boston wanted to avoid trading its defensive stopper in Smart, Thompson and at least four other players would have to head the other way — thinning out the team’s roster in a big way.

The likelier option is that Boston utilizes the above-mentioned trade exception to acquire Harrison Barnes.