The Denver Broncos kicked off their 2021 NFL season with a win and optimism about their chances of contending for a playoff spot. As the team focuses on what’s taking place on the field, issues on the ownership side could greatly impact the club’s future.

Pat Bowlen, the longtime Broncos’ owner, passed away in 2019. He had already surrendered control of the team to a trust in 2014 as he battled Alzheimer’s disease and create plans of succession. But, following his death, a legal battle starter between family members, including two of his adult daughters, over who had ownership of the Broncos.

The New York Times reported in July that a Colorado judge dismissed a lawsuit filed by two of Bowlen’s daughters over the succession plan. Bowlen Wallace, 50, told the New York Times in 2018 that she believed she was ready to take control, but the trust overseeing the club supported Brittany Bowlen, a child from Bowlen’s second marriage.

With the family greatly divided over who should receive control over the Broncos, the trustees are reportedly willing to sell the team in the near future. If that happens, potential buyers could already be emerging.

According to A.J. Perez of Front Office Sports, Amazon founder Jeff Bezos and mogul Jay-Z are reportedly being brought up frequently as potential buyers of the Broncos.

Bezos, who has a net worth of $200 billion, is a popular name when it comes to buying a team. He previously expressed interest in buying the Washington Football Team and it’s widely believed the NFL would love to have him as part of its ownership circle.

Jay-Z, whose net worth is estimated at $1.4 billionaire, became hip hop’s first billionaire in 2019. He previously owned a percentage of the Brooklyn Nets, but solid it because NBA rules don’t allow an agent or player agency to own a team.

Pat Bowlen bought the Broncos in 1984 for $78 million. With the league generating more revenue each year, owning an NFL team has become a stable source of profits for billionaires. The league just signed new TV contracts worth more than $100 billion and is projected to generate $270 million from betting deals this year.

According to Forbes, the Denver Broncos are the 10th-most valuable franchise in the NFL at $3.75 billion, a 17% increase from last year. 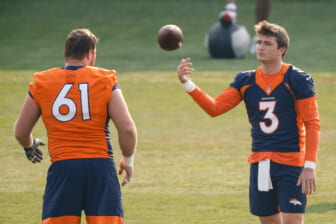