The Florida State Seminoles’ football program has gone through three straight losing seasons and are on course for a fourth following a 0-3 start to 2021, and rumors are swirling that Deion Sanders could eventually become the new head coach.

Pro Football Network’s Tony Pauline is reporting that Sanders has huge support in Tallahassee, and that in the spring, there was even talk of bringing “Prime Time” to Florida State to replace Mike Norvell:

“I asked, ‘What happens if Mike Norvell goes undefeated the rest of the season?’ My source told me, there’s still a very good chance they bring Sanders in. […] It’s been something that’s been talked about and I’ve heard about since we got into Spring Football earlier this year. Deion Sanders to Florida State is very real.

This is especially notable considering the fact that Norvell has four years remaining on a six-year contract. In order to bring in “Neon Deion” to replace him, the Seminoles would have to usher Norvell out with a high-cost buyout.

Sanders shined at Florida State as a defensive back and punt returner. His incredible athleticism and coverage skills led to a Hall of Fame NFL career, and since retiring from pro football, Sanders has remained around the game in various capacities.

After some time working in the media, it was clear Sanders wanted to go full-out into coaching. Now, he’s the head coach at Jackson State, seeking to build a unique legacy and boost the national profile of HBCU programs. His son, Shedeur Sanders, is a freshman and starts at quarterback for the Tigers. 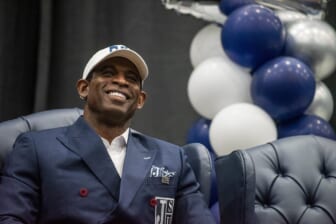 For Deion Sanders, the opportunity to restore his alma mater to prominence at the highest level of college football could be too tempting to pass up — even if his heart is pouring into everything he’s doing at Jackson State for now.

Florida State is in need of some juice, and there’s reason to believe Sanders can definitely recruit talent to Tallahassee. His resume speaks for itself, and it’s hard to envision a splashier move that’d have more merit behind it than hiring Sanders as the Seminoles’ new head coach.

Time will tell if this comes to pass, or if it’s a pipe dream being floated by Florida State sources desperate for a spark amid a down period for the program. Whatever the case may be, imagining Sanders strolling the Seminoles’ sidelines is fascinating.