Defense leads No. 4 TCU to gritty win over No. 18 Texas 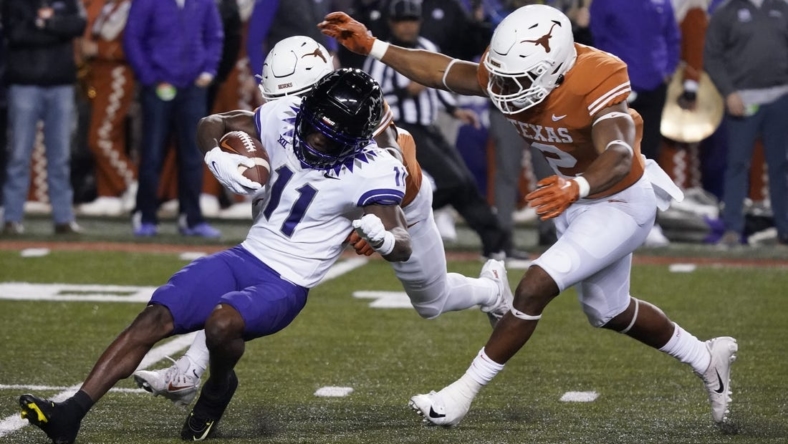 Kendre Miller rushed for 138 yards, including a 75-yard touchdown run, and the defense did the rest as visiting No. 4 TCU upset No. 18 Texas 17-10 on Saturday in a key Big 12 game in Austin, Texas.

TCU was a touchdown underdog.

The Horned Frogs did just enough in a game that was ruled by the defenses for the first three quarters. Miller’s long touchdown run deep into the third quarter and a 31-yard scoring pass from Max Duggan to Quentin Johnston with 12:36 left were the deciding plays.

TCU (10-0, 7-0 Big 12) is now guaranteed to finish the regular season with one of the top two spots in the conference, earning a berth in the league championship game.

The Longhorns’ lone touchdown came via its defense when Jahdae Barron picked up a Duggan fumble on a botched handoff and returned it 48 yards to cut TCU’s lead to 17-10 with 4:25 remaining.

Duggan passed for 124 yards as the Horned Frogs amassed only 283 yards of total offense.

Texas quarterback Quinn Ewers threw for 171 yards and was intercepted once. He didn’t complete a pass until four and a half minutes into the second quarter.

The defenses were dominating in the first quarter, which was scoreless thanks to a partially blocked field goal by Texas on a 34-yard attempt by the Horned Frogs’ Griffin Kell with 22 seconds to play.

The 39 combined yards for the teams over the first 15 minutes were the fewest in any quarter in college football this season.

The Horned Frogs added to their lead at the 5:08 mark of the third quarter when Miller burst through a huge hole inside right tackle, made a move to the outside and outraced the defense to the end zone.

The Longhorns finally got on the board on Bert Auburn’s 22-yard FG with 58 seconds to play in the third quarter.