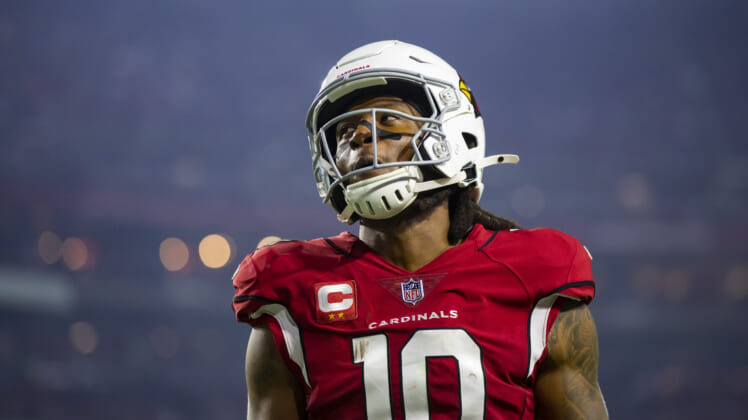 In what has to be considered shocking news, Arizona Cardinals star wide receiver DeAndre Hopkins has been suspended six games by the NFL for violating the league’s’ Performance Enhancing Drug (PED) policy.

ESPN’s Adam Schefter was the first to report the eye-opening news that one of the best receivers in the game will miss the first six games of the 2022 NFL season.

There’s no word yet on what Hopkins tested positive for. But the suspension is apparently final without any opportunity for Hopkins to appeal.

“DeAndre Hopkins of the Arizona Cardinals has been suspended without pay for the first six games of the 2022 regular season for violating the NFL policy on performance-enhancing substances.

Hopkins is eligible to participate in all preseason practicies and games. He will be allowed to return to the Cardinals’ active roster following the team’s sixth regular-season game.”

DeAndre Hopkins suspended: What it means

Arizona just acquired star wide receiver Marquise Brown from the Baltimore Ravens during the 2022 NFL Draft. One has to wonder if general manager Steve Keim and Co. made that decision based on the likelihood that Hopkins would end up being suspended. The Cards also lost wide receiver Christian Kirk to the Jacksonville Jaguars during free agency.

Acquired in a blockbuster trade with the Houston Texans ahead of the 2020 season, Hopkins is coming off an injury-plagued 2021 campaign that saw him miss seven games. In the 10 games he played in, the All-Pro pass-catcher tellied 42 receptions for 572 yards and eight touchdowns. He was also brilliant in his first season with the Cardinals.

With Hopkins sidelined for the first six games, quarterback Kyler Murray will have to rely on other weapons to keep his Cardinals above water. In addition to Brown, that includes youngster Rondale Moore and veteran former Pro Bowler A.J. Green.

We’ll have further updates on DeAndre Hopkins suspension when they become available. For now, this is a massive blow for the Cardinals.