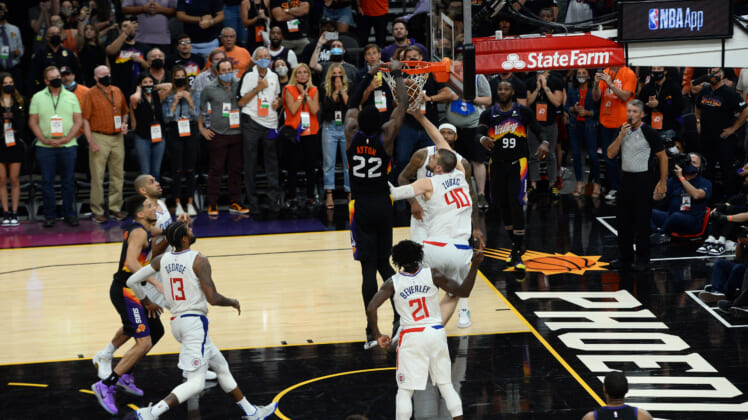 The Phoenix Suns are now two wins away from earning their first NBA Finals appearance since 1993, and they have Deandre Ayton to thank for it.

With Devin Booker struggling big time during Phoenix’ Game 2 outing against the Los Angeles Clippers in the Western Conference Finals, Ayton came to play big time. Continuing his proverbial coming-out party in the 2021 NBA Playoffs, the former No. 1 pick connected on 12-of-15 shots for 24 points while grabbing 14 rebounds.

However, it was this one play at the end of the dramatic game that had everyone talking. With Los Angeles up 103-102 and less than a second left, Jae Crowder connected with Deandre Ayton on a game-winning alley-oop on an inbounds pass. It was something to behold at Phoenix Suns Arena.

Absolutely bananas. How the Clippers didn’t guard the low-post on that inbounds pass is beyond comprehension.

The Deandre Ayton game-winner also came mere seconds after a controversial review gave the Los Angeles Clippers possession of the ball up one with less than 10 seconds remaining in the game. In the ultimate “ball don’t lie moment,” Paul George missed two free throws to set up that game-winner from Ayton. It was just an insane ending.