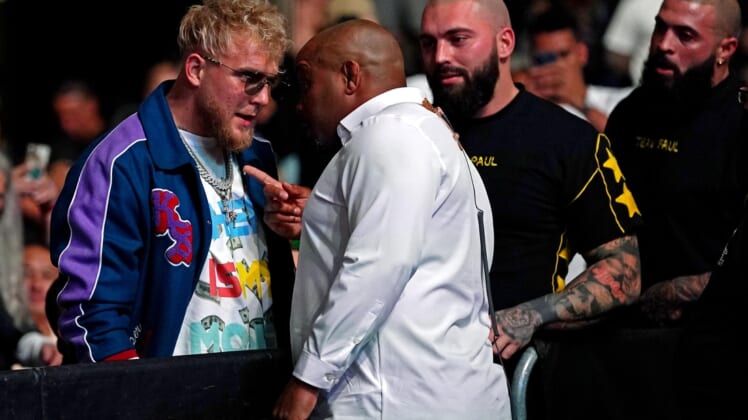 UFC president Dana White said he doesn’t want anything to do with YouTuber-turned-boxer Jake Paul.

Paul made a scene at UFC 261 last month in Jacksonville, Fla., when he got into a heated exchange with ringside announcer and former UFC champion Daniel Cormier.

“First of all, I would never do business with those guys, just no,” White said. “No, this is not what we do. I’m not gonna (expletive) loan them a guy for (expletive) what? There’s no way. You got plenty of (expletive) goofballs out there that you can muster up to get in there and play these games that these guys are playing. Yeah, I’m not your guy.”

White did admit that Paul’s victory over Askren “blows my mind.”

“I have a hard time wrapping my brain around that,” White told ESPN. “Let’s see how long it takes before this kid’s 15 minutes are up, but they are being smart. They are keeping him away from anybody that could actually really do damage. I don’t know.”

Last week, Paul’s antics went viral during a pre-fight faceoff between his brother, Logan Paul, and boxing legend Floyd Mayweather. Logan Paul and Mayweather are scheduled to box on June 6 in Miami. Jake Paul sparked a brawl at the event by snatching Mayweather’s ballcap off his head.