Dallas Cowboys offensive lineman Zack Martin tested positive for COVID-19 and will miss the season opener on Thursday against the Tampa Bay Buccaneers.

Martin, a six-time All-Pro selection, has only missed eight games since he entered the league in 2014. On Sunday morning, head coach Mike McCarthy revealed the Cowboys won’t have their top offensive lineman for the NFL Kickoff Game.

Dallas was already dealing with concerns along the offensive line entering the week. La’el Collins, who missed the entire 2020 season, is dealing with a stinger. McCarthy shared the Cowboys’ right tackle would return to practice this week, but it comes with a new blow to the team’s pass protection. 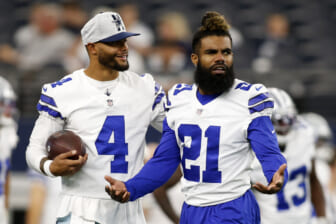 With Martin sidelined for Week 1, Dallas will start Connor McGovern at right guard. McGovern generated trade interest this summer, but Dallas opted to keep him to preserve its depth. Already a massive underdog against the Buccaneers, this matchup now looks even worse for the Cowboys.