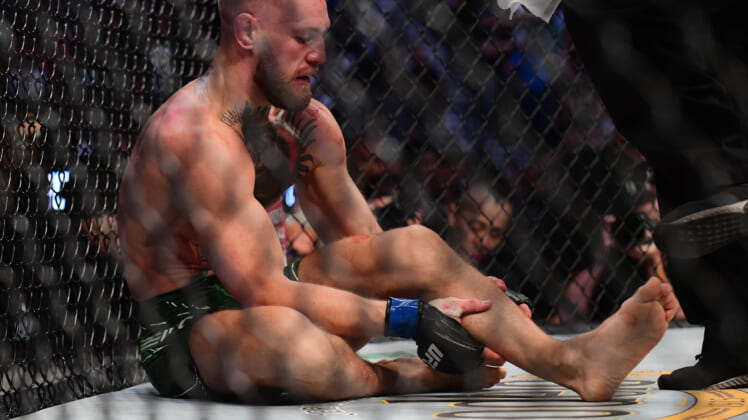 UFC President Dana White has offered up a Conor McGregor injury update, as well as his thoughts on the possibility of a third fight being made with the Irishman’s long-time rival Nate Diaz.

In July, the former featherweight and lightweight champion suffered a gruesome leg injury during his trilogy bout with Dustin Poirier. A checked leg kick fractured McGregor’s lower limb in two places and brought an end to their bout. The loss was a second straight by technical knockout against the “Diamond.”

Since that fateful night at UFC 264, “Notorious” has posted a plethora of updates in tweets and videos, as he lets fans follow along in his journey back to the Octagon. However, it is still unclear when the MMA superstar could return to action. Early suggestions pinpointed a return this summer. But based on an update from the UFC boss, it seems that fans will have to wait even longer for McGregor’s UFC comeback.

“He’s chomping at the bit to come back” White told TMZ Sports on Tuesday. “Realistically, when you look at everything he’s got going on right now with coming back, and other things that need to be done to get ready to prepare again, [a return time frame is] probably early fall.”

There have been various suggestions about who the co-founder of Proper Twelve Irish Whiskey could face when he is ready to step back into a cage fight. For diehard fans of the UFC, a trilogy bout with Diaz has been yearned for since their rematch in 2016. The pair have split their two bouts, and both were massive successes on pay-per-view.

Since Jan. Diaz and Poirier have bantered back and forth on social media as they’ve pushed for a fight against each other at welterweight. However, a booking has yet to be made despite their public interest.

Diaz only has one fight left on his contract, and with Diaz vs Poirier not finalized, White left the door open for a McGregor vs Diaz trilogy fight sooner than later.

“We’re still working on [Poirier vs Diaz]. That fight’s not done yet. I wouldn’t count out a Conor-Nate III,” he said. … “I’d be shocked if that fight didn’t happen again.”

It’s unclear if a trilogy fight between the American and Irish superstars would be the last on Diaz’s UFC deal, or if White has confidence he can get the Stockton bad boy to re-sign with the promotion he has fought for since 2007.