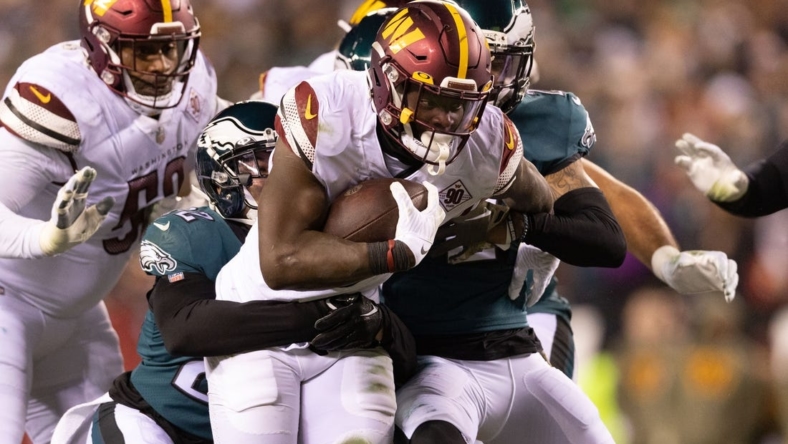 Members of the unbeaten 1972 Miami Dolphins can now relax as Taylor Heinicke and the Washington Commanders handed the Eagles their first loss of the season, 32-21, on Monday night in Philadelphia.

The Commanders (5-5) controlled the clock and made timely takeaways, bringing a stunning halt to the best start in franchise history for the Eagles (8-1).

Washington converted 12 of 21 third downs against what had been a dominant defense all season. The Commanders ran 81 plays and held the ball for 40:24 of the 60 minutes. Philadelphia turned the ball over four times, one more than their total from the first eight games.

Heinicke was an efficient 17-of-29 for 211 yards, making his case to remain the starter when Carson Wentz comes off injured reserve. Brian Robinson Jr. and Antonio Gibson both rushed for touchdowns, and Joey Slye kicked four field goals.

Eagles quarterback Jalen Hurts had won a team-record 11 straight regular-season starts, a span that included three wins against Washington, including Week 3 this season. He passed for two touchdowns and rushed for another.

Hurts’ 11-yard touchdown pass to DeVonta Smith on the first play of the fourth quarter got the Eagles to within 23-21.

After Jamin Davis forced and recovered a fumble by Dallas Goedert, getting away with a facemask grab on the play, Slye’s 55-yard field goal made it 26-21 with 7:33 left.

The Eagles’ next drive also ended with a fumble by Quez Watkins after a 50-yard grab. Benjamin St-Juste jarred the ball loose and Darrick Forrest recovered.

Washington forced a three-and-out on Philadelphia’s next possession. The Eagles got the ball back with five seconds left at their own 10, but an attempt to advance the ball with laterals backfired as Casey Toohill recovered a fumble for a touchdown on the final play.

Josh Sweat sacked and stripped Heinicke on the game’s first possession. Hurts punched it in from the 1 for a 7-0 lead just 2:34 into the game.

Hurts tossed a 6-yard TD pass to Goedert for a 14-7 lead late in the first quarter.

Slye’s 32-yard field goal with 5:17 left supplied the only points of the third quarter.