Colts in difficult position as Jacoby Brissett continues to struggle 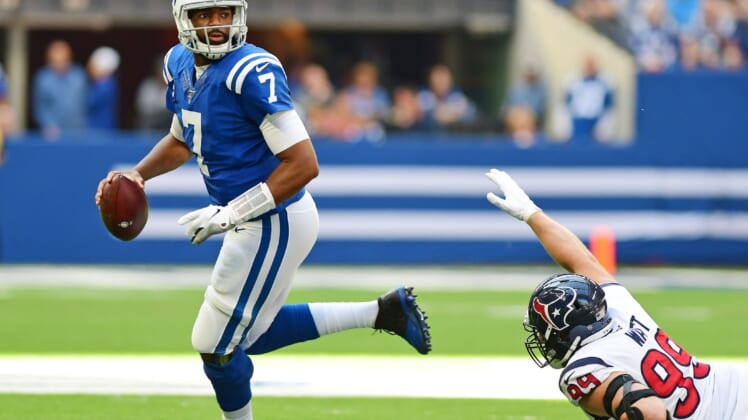 The Indianapolis Colts opened the season with a 5-2 record and hope that Jacoby Brissett might actually be able to fill the massive void left by Andrew Lucks’ shocking retirement.

Then, Brissett hurt his knee, missed a game, and hasn’t been the same since. Not surprisingly, the Colts have gone 1-5 during this stretch, which has seen Brissett looking painfully mediocre. Or worse.

So what happened? The stats show that Brissett’s knee injury at least partly brought about the change.

Here’s what Brissett did in seven-plus games before his injury:

And here’s what he’d done in the five games since:

Now, some of the regression could be do to the fact that T.Y. Hilton has been out of commission since Nov. 21 when he suffered a calf injury. And it also didn’t help that Marlon Mack missed time with a broken hand.

But both Mack and Hilton were available on Monday night as the Colts faced a must-win game against the New Orleans Saints. With playoff elimination on the line, Brissett and his offense faceplanted on national television.

Brissett passed for just 165 yards on 18-of-34 attempts. He was off the mark on more than a few incompletions. Pressure was a factor at times, but from a clean pocket Brissett simply overthrew some open receivers at least three times — something that’s been a constant issue in recent games.

Looking at Brissett’s season as a whole, it’s not great. From a stats perspective, he’s a mediocre quarterback.

Even worse, as we indicated above, he’s gotten worse as the season has progressed.

So now, the Colts are in a pickle.

Having just doled out a two-year, $30 million extension to Brissett after the stunning Luck retirement that rocked the organization, they have to figure out whether it’s prudent to continue riding Brissett for the foreseeable future, or if it’s time for a full restart.

Is Brissett’s second-half collapse an indicator that perhaps his knee injury is really to blame? Or are we finally seeing that he’s never going to quite ascend past the level of average?

This team is built to win a championship. It has outstanding young and veteran talent on both sides of the ball. When the defense is at full strength, it’s formidable.

This is a team that Andrew Luck probably would have won at least 10 games with in 2019, if he were playing. Instead, the Colts are now looking at a 6-8 record heading into the final two games of the season.

General manager Chris Ballard has done some amazing things during his tenure with the Colts. But his biggest challenge may yet be ahead of him. It’s going to be interesting to see what the Colts do about the quarterback position this offseason.

Is Jacoby Brissett really the guy? A question that would have been answered with a positive just a few months ago is no longer so certain.