Baker Mayfield future forecast: Browns franchise QB, or middling No. 1 pick? Cleveland's rebuild is already ahead of schedule, but Baker is cooking lately. 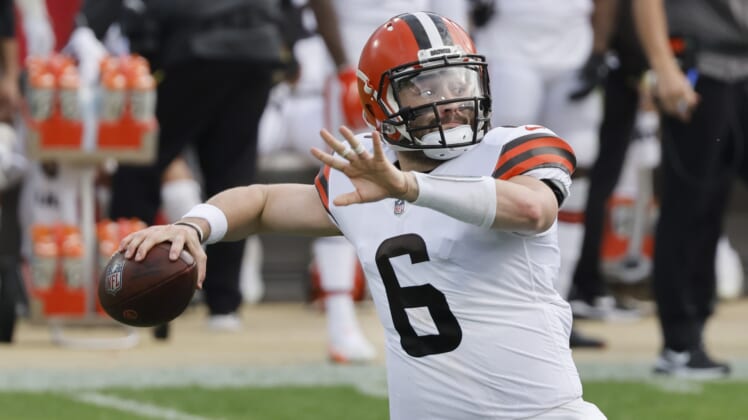 Baker Mayfield’s future as Cleveland Browns quarterback hangs in the balance down the stretch of the 2020 season, but the franchise is well ahead of schedule amid its latest regime change no matter how the former No. 1 overall pick pans out.

Whether the Browns pick up Mayfield’s fifth-year option for 2022 before next season remains to be seen. It largely depends on what happens in the next several games, as Cleveland is firmly in the driver’s seat for a playoff spot. The thing is, Mayfield shouldn’t be sweating all this too much, nor should the Browns, and his recent uptick in play is all the more reason to be encouraged.

Not to be all dismissive and nonchalant about all this, but Cleveland fans shouldn’t be trying to rush to judgment on the long-term outlook for Baker Mayfield’s NFL career. No matter: rumors have been swirling about his future; in a piece for the The Athletic, Dan Pompei quoted an executive and an evaluator who suggested Mayfield could be on the block and have a market for his services.

Mayfield did nothing to shrink the hype with perhaps the best game of his young career in a 41-35 victory over Tennessee several weeks ago. He completed 25 of 33 passes for 334 yards and four touchdowns. After a somewhat rocky start against a much better Baltimore defense on Monday Night Football, as an encore act, Mayfield wound up throwing for 343 yards and two scores to go with a rushing TD in the Browns’ 47-42 loss to the Ravens.

Instead of suffering a letdown and being discouraged by defeat, Mayfield once again rose up and continued to show improvement, leading Cleveland to a 20-6 victory over the New York Giants in Week 15. He completed 27 of 32 passes for 297 yards and two scores in a highly efficient outing that suggested he may well be turning a legitimate corner as a player.

Between a mostly easy schedule and Mayfield’s inconsistency creating uncertainty at the most important position on the field, Browns diehards, damaged from years of ineptitude, losing and lack of organizational continuity, hadn’t quite been able to talk themselves into this 2020 team being for real prior to beating the Titans.

Skeptics still have talking points, albeit much weaker ones now, about how Mayfield has fared of late: Tennessee has absolutely zero pass rush, Baltimore’s secondary was extremely banged up, and the Giants started a backup quarterback and were without their No. 1 corner, James Bradberry.

Furthermore, four of Cleveland’s wins in 2020 have come against the NFC East. Two others were against the Cincinnati Bengals, who were a meager opponent even when Joe Burrow wasn’t injured. And Week 12 was a victory over 1-11 Jacksonville.

Mayfield enters Week 16 ranked 18th in the league with 3,082 passing yards (220.1 yards per game) with 25 touchdowns, eight interceptions, a 99.4 passer rating and a 64.0% completion rate. The good news is twofold. First, the lack of interceptions is noticeable, and Mayfield has been less of a game manager. For a time, he took calculated risks, but despite feasting on facile competition for some of his bigger numbers, he’s simply letting it rip and playing like an elite QB.

All that said, the notion that the Browns needed to decide immediately on Mayfield’s future after the Titans game, or the Ravens game, or really after this year — and how much of a franchise-defining crossroads it is — is a bit over the top.

Now to the bottom line, lest you sit on pins and needles any longer: think about where Cleveland is and how far this maligned franchise has come in such a short period of time.

Head coach Kevin Stefanski is in his first year on the job. The same goes for general manager Andrew Berry, the youngest executive hired to that high position in NFL history. In a division with the Pittsburgh Steelers, who began the year 11-0, and a Ravens team who was the No. 1 AFC seed last season, the Browns have managed to all but lock up a postseason berth with a 9-4 record.

Mind you, despite this latest regime overhaul being further hampered by the COVID-19 pandemic, Stefanski has brought a much more buttoned-up, professional and disciplined approach — not to mention dialed up plays for the No. 1 rushing attack in the NFL. Even with Mayfield’s uneven play, Cleveland has deployed Nick Chubb and Kareem Hunt to firmly establish a run-first, physical identity.

This ability to run the ball at such an elite level sets up play-action passes like these, which really blew open the Titans game in Week 13:

Berry rebuilt the offensive line this past offseason to help Mayfield be more comfortable. The GM upgraded the offensive tackle positions with rookie first-round pick Jedrick Wills protecting Mayfield’s blind side, and Jack Conklin arriving from the Titans via free agency to start at right tackle. Right guard Wyatt Teller was a holdover from 2019, and has thrived as an absolute mauler in Stefanski’s scheme, ranking No. 1 in Pro Football Focus‘ player grades at guard. Browns mainstay Joel Bitonio is PFF’s third-ranked guard in the league.

Now that the Browns have an open-minded coach in Stefanski whose ego is in check, is on the same page with his GM and the front office and can play to the strengths of his players, Cleveland is moving full speed ahead with its most cohesive, united front in a long time.

Cleveland Browns cap space, future QB options for 2021 and beyond

All of this newfound stability makes Mayfield less consequential. If he doesn’t work out, it won’t cost the Browns too dearly, as they can either decline his fifth-year contract option or trade him. The better he plays, the more of a win-win it is for Cleveland.

Even if the Browns do pick up Mayfield’s club option and it’s not looking pretty during 2021, what decent QB wouldn‘t want to come play in Cleveland? Sure, the weather isn’t great and it’s not a “destination city” but from a purely football standpoint, even above-average play under center will have the Browns as perennial playoff contenders.

Consider that Cleveland still has a projected $27.6 million in cap room entering 2021, per OverTheCap.com, despite the massively lowered cap ceiling. Look at the quarterbacks who could be available in free agency or through a trade: Jimmy Garoppolo, Matthew Stafford, Dak Prescott and Matt Ryan all come to mind as possibilities.

Jimmy G just played in a Super Bowl yet is under evaluation in San Francisco. Ryan was a 28-3 collapse from winning a championship, and could be looking for a new team as Atlanta focuses on a rebuild this coming offseason with a new coach-GM combo. Prescott could seek greener pastures outside of Dallas since the Cowboys balked at signing him to a long-term contract. Finally, Detroit is in the midst of a regime change as Stafford approaches the end of his prime, so he may be on the way out.

All of them, with the exception of Garoppolo due to his inability to stay healthy, feel like upgrades over Mayfield — at least in terms of what they’ve accomplished in their careers to this moment.

Alternatively, if Cleveland feels really bold and like a quarterback in either of the next two drafts, they should have enough resources handy to trade multiple assets and move up in the order to select who they like. From there, they’d use the remaining cap space to build the roster’s talent and depth around another young QB on a cheap rookie contract.

Finally, there’s the simpler solution: Mayfield continues to grow in the offense after going through three different head coaches in as many years to begin his NFL career. He settles into his role as the long-term answer Cleveland has waited for since returning to the NFL in 1999.

Just look at how many scenarios still result in the Browns being good for a very long time. Vital as the quarterback position is, Cleveland has many paths forward to either foster Mayfield’s development, move off him for a prospect with greater upside, or bring in an established veteran who can get the Browns over the hump and cement the team’s status as a legitimate Super Bowl contender.