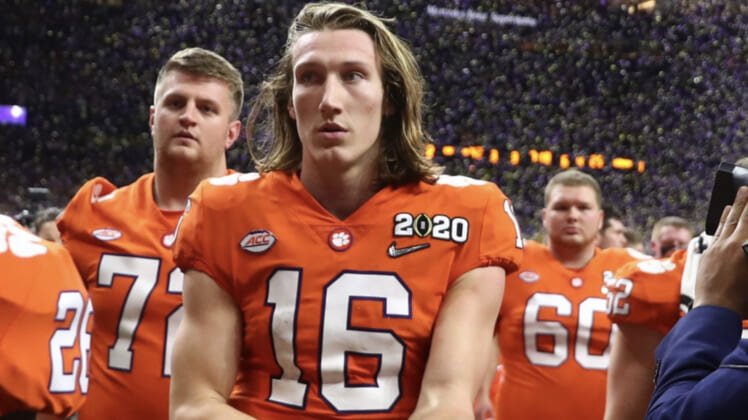 The Clemson Tigers dropped what was a highly entertaining National Championship Game against the LSU Tigers Monday night.

It was a sorely disappointing way for Clemson quarterback Trevor Lawrence to conclude his sophomore season. In fact, Monday night’s loss in New Orleans represented the first of his collegiate career.

However, the idea that this might be the end of Clemson’s dominant run under Dabo Swinney is completely false. Lawrence returns for next season. Other top-end Tigers players wil join him for another run at this thing.

It has Clemson as the early favorites to win the title next season. It also has Lawrence as the favorite to come away with the Heisman.

With Lawrence returning and boasting the top recruiting class of 2020 (via ESPN), this should not come as too much of a surprise. Despite Monday’s loss, Swinney has built a powerhouse at Clemson.

Alabama might be losing Tua Tagovailoa and a number of others players to the NFL, but it’s also surprisingly returning a lot of core players that decided to return for another season at Tuscaloosa. That includes stud receiver Devonta Smith.

Meanwhile, the combination of Mac Jones and Bryce Young should be able to hold down the fort at quarterback.

As for the Buckeyes, Justin Fields returns under center and the team boasts a No. 4 nationally ranked recruiting class.

Lawrence’s status as a Heisman favorite also shouldn’t come as too much of a surprise. All the quarterback has done is put up north of 7,600 total yards with 76 touchdowns and 12 interceptions in two seasons. He’s joined by an elite group of contenders.

Of this group, Rattler is an intersting option. Set to potentially start as a sophomore, the pro-style quarterback was among the top recruits from the Class of 2019.

Just ask Baker Mayfield, Kyler Murray and Jalen Hurts what it means to be a starting quarterback under Lincoln Riley in Norman.