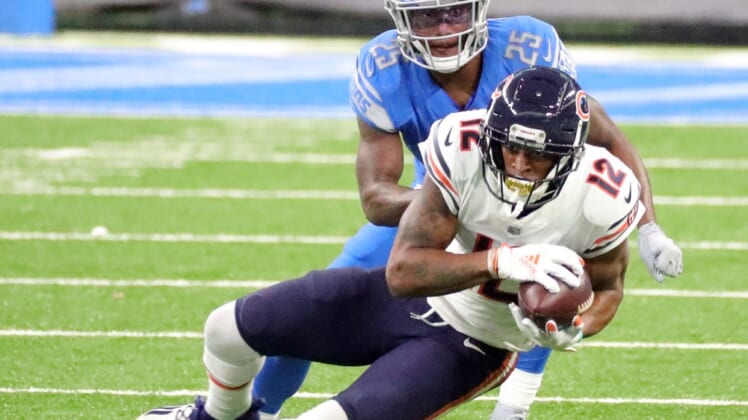 Wide receivers being unhappy around the NFL is nothing new. For many, this is the ultimate diva position. Players boasting boisterous personalities, huge egos and acting as engimatic members of their teams.

However, just one week into the 2020 NFL season, the ante has been upped a whole lot. Fresh off news that the Cleveland Browns might look to trade disgruntled pass-catcher Odell Beckham Jr. comes this piece of information.

“The divide between Robinson and the Bears runs deeper than that, though, as a league source told the Tribune that Robinson has asked about a possible trade,” Brad Biggs of the Chicago Tribune reported Tuesday.

Just days after a shocking comeback win over the Detroit Lions, it appears that everything is not great in the Windy City. As noted earlier on Tuesday, Robinson removed all mentions of the Bears from both his Twitter and Instagram social media accounts.

It issue here is a contract rift between Robinson and the Bears.

Signed to a three-year, $42 million contract ahead of the 2018 season, Robinson is earning a base salary of $10.9 million in the final year of his deal. Based on average annual salary, he’s the 15th highest-paid wide receiver in the NFL.

That doesn’t necessarily match the production we’ve seen from Robinson catching passes from a pedestrian quarterback in that of Mitchell Trubisky.

Robinson, 27, hauled in 98 receptions for 1,147 yards while catching 64% of his targets for the Bears last season.

Typically, Bears general manager Ryan Pace has been able to work out extensions with his core players before they enter a contract year. Given Robinson’s trade request and the fact that we’re in the midst of the 2020 season, it seems that the two sides are far apart.

If that is indeed the case, there’s a good chance that Chicago will engage in trade talks with teams leading up to next month’s deadline.

The team will want to get something in exchange for the veteran rather than potentially losing him for nothing in free agency this coming March.

There’s a number of contending teams out there who would be in the market for someone of Robinson’s ilk. The New England Patriots, San Francisco 49ers and Philadelphia Eagles, among others, come to mind.