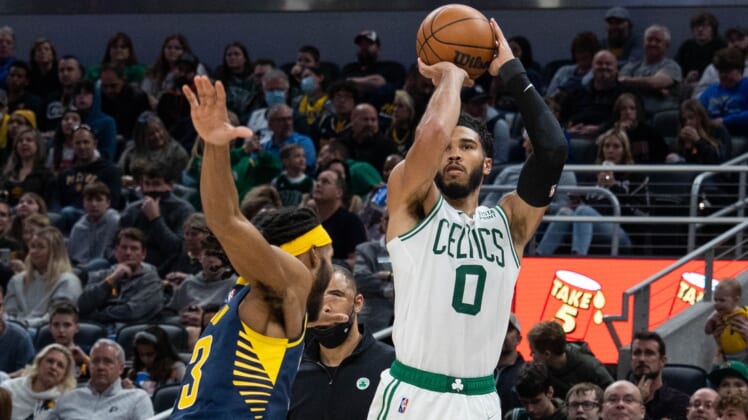 The Boston Celtics will return home for the first time following the NBA All-Star break when they play the Atlanta Hawks on Tuesday night in the start of a three-game homestand.

Boston returned to action with consecutive wins before Sunday’s 128-107 loss at Indiana in the finale of a three-game trip. The setback was only the Celtics’ second in their last 13 games.

“They made some easy shots early and then it snowballed,” Boston coach Ime Udoka said. “We did defend better (eventually), but credit to them, especially for the ones they hit late. But to start the game, (Tyrese) Haliburton, (Buddy) Hield — those guys were kind of walking into 3s when we were under the 3-point line. You want to make them play inside the 3-point line.

Jayson Tatum scored 24 points, Jaylen Brown added 23 and Robert Williams collected 10 points and a game-high 11 rebounds for his 21st double-double of the season.

“We try to keep the outside pressure outside and just come in and play basketball,” Brown said. “Just hoop, execute, do your job well, and just stay the course. And that’s brought us into good moments in the season, even in the midst of adversity.”

Boston has played its recent games with a clean bill of health, but Al Horford had Sunday off after playing 37 minutes during the 113-104 win at Detroit on Saturday. Brown had a game-high 27 points in the first of the back-to-back games.

The Hawks are coming off a dominant 127-100 win over Toronto on Saturday.

Atlanta All-Star Trae Young scored 25 of his 41 points in the first half. He made 17 of 24 shots from the floor and handed out 11 assists.

Young’s 22nd career game with 40 or more points (and sixth of the season) followed a 3-for-17 shooting performance on Thursday against Chicago.

“I told y’all I was going to bounce back,” Young said. “I didn’t have a good shooting game in Chicago, obviously. I felt like there were shots I could have made, but it felt like the legs and things just weren’t there.”

Young was quick with an answer after he was asked what he saw after reviewing the game tape from the loss to the Bulls.

“I didn’t even need to watch it again, to be honest with you,” he said. “That was actually one of a couple games I didn’t watch this year.”

“He basically put that game on himself and felt that he didn’t play well (Thursday), and he knew that he could play better,” McMillan said of Young. “It was one of those games where his shot wasn’t falling. … I felt that he would come out very aggressive tonight. He did and really established our tempo.”

John Collins, who has missed the last five games, tested his strained right foot for the first time before Saturday’s contest.

“(He) did some shooting and a little running,” McMillan said.

Guard Lou Williams was out of Atlanta’s last game due to left-hip discomfort.