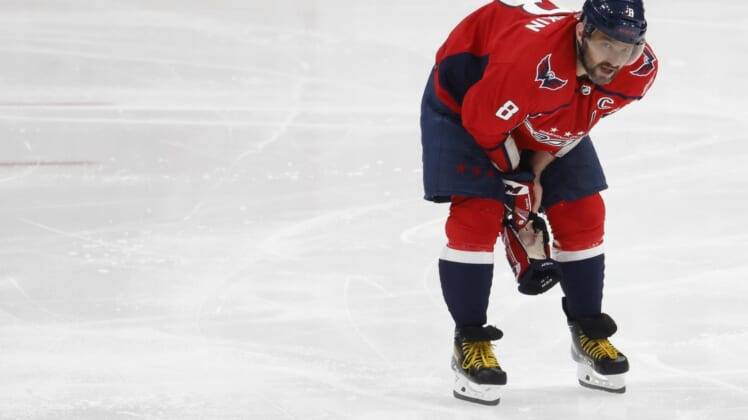 The New York Islanders’ long-shot playoff hopes always hinged on a collapse by the Washington Capitals.

On Tuesday night, the teams will meet in the first game of a back-to-back with the Capitals’ playoff spot secure and the Islanders left playing for pride.

The Capitals (44-23-12, 100 points) still have hopes of climbing out of a wild-card position and into third place in the Metropolitan Division, while sitting one point behind the Pittsburgh Penguins. They take another step toward that goal at home Tuesday, with the rematch set for Thursday at New York.

Both teams were off Monday after absorbing defeats at home Sunday. The Capitals squandered a two-goal third-period lead and fell to the Toronto Maple Leafs 4-3 in a shootout, while the Islanders lost to the Carolina Hurricanes 5-2.

The loss may have been extra costly for the Capitals, who played the final 22-plus minutes and the shootout without superstar left wing Alex Ovechkin. He exited after tripping over the stick of Maple Leafs goalie Erik Kallgren and crashing into the boards with his left shoulder absorbing the impact.

“I just talked to him and I think he’ll be alright,” Capitals right winger T.J. Oshie said. “It’s always scary seeing ‘Big 8′ go down and lay on the ice.”

The comeback by the Maple Leafs also cost the Capitals a chance to at least temporarily move into third place in the division. They do have a game in hand on the Penguins.

The third-place finisher in the division will face the second-place team, currently the New York Rangers with 108 points. The Rangers are four points behind the first-place Carolina Hurricanes heading into a game between the teams at Carolina on Tuesday. The fourth-place team will likely be the second and final wild card and draw the Florida Panthers in the first round.

The Boston Bruins hold the first wild-card spot, three points ahead of the Capitals. Both teams have three games remaining.

“It’s tough, it’s frustrating — that’s a game we can’t lose,” Laviolette said of the Capitals, who scored twice in the first three minutes following Ovechkin’s exit before the Maple Leafs stormed back. “We’re doing all the right things and we let it off the hook at the end, so that’s on us.”

Even with the loss, the Capitals are 16-5-3 since March 1, a stretch that ended any hopes the Islanders had of digging out of the hole created by their 11-game losing streak amid a COVID-19 outbreak Nov. 7-Dec. 5. New York had made the playoffs each of the previous three seasons.

The Islanders (35-34-10, 80 points) have gone a respectable 15-13-2 since March 1 but have lost three points in the standings to the Capitals. New York has lost five straight and hasn’t led in any of its last three losses while playing 35 games in the season’s final 63 days.

“You want to win,” Islanders left winger Matt Martin said. “You want to feel good and be happy and have a smile. This season didn’t go the way anyone expected it to. That’s disappointing. It’s not a whole lot of fun playing below expectations.”