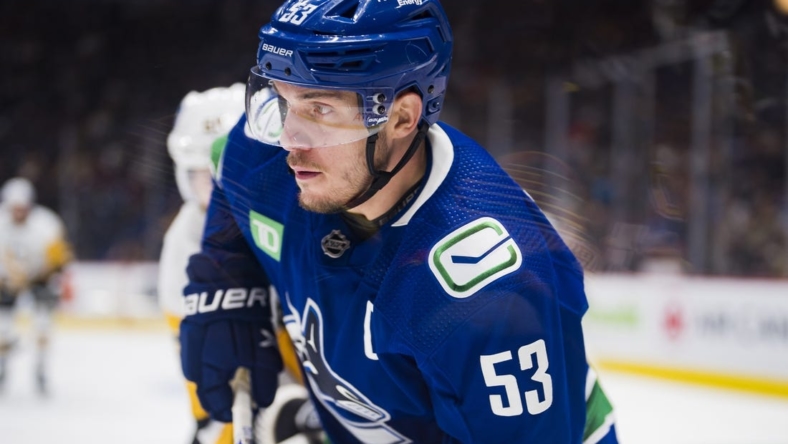 The sight of the New Jersey Devils across the ice Tuesday night will offer a reminder to the Vancouver Canucks of who they want to emulate and where they want to go.

The Canucks will look to continue climbing out of their early-season hole Tuesday, when they host the Devils in the first game of the season between the teams.

The Canucks haven’t played since Friday, when they won for the second time in as many nights by cruising past the visiting Pittsburgh Penguins, 5-1. The Devils won their third straight Sunday afternoon, when they rolled to a 7-1 win over the visiting Columbus Blue Jackets.

A big third period against the perennially contending Penguins provided some catharsis for the Canucks, who became the last team in the NHL to earn a win when they edged the Seattle Kraken 5-4 on Thursday.

Vancouver, which became the first team in NHL history to blow multi-goal leads in each of its four games, opened 0-5-2 while being outscored 15-2 in the third period.

The Canucks squandered a pair of one-goal leads against the Kraken before scoring twice in the third and further vanquished their demons Friday, when they scored three unanswered goals over the final 20 minutes despite being outshot 15-10.

“It’s two games but you could tell it was like the weight of the world was lifted off our shoulders, quite frankly,” said Canucks coach Bruce Boudreau after Friday’s game. “Because every other third period has been like ‘Oh, what’s going to happen that’s negative?’ And I think once we got through the first three minutes, it was like ‘OK, let’s go.’ And everybody just played and I thought it was really good.”

The Devils have authored a pretty solid template for overcoming a slow start. New Jersey, which has missed the playoffs in each of the last four seasons, was outscored 10-4 in losing its first two games but has won six of seven since (6-1-0) while outscoring the opposition 27-13.

The Devils produced perhaps the most dominant win by an NHL team this season in Sunday’s victory. Seven players scored a goal apiece and New Jersey produced 53 shots — tied for the second-most in a game through Sunday — while becoming just the second team to win a game by six goals. The New York Islanders also beat the Anaheim Ducks 7-1 on Oct. 15.

The complete victory Sunday was especially encouraging for the Devils, who edged the defending Stanley Cup champion Colorado Avalanche 1-0 on Friday night.

“This win shows character,” said Devils center Nico Hischier, who had a goal and an assist. “We beat a great team on Friday and then put it behind us. If we win, we can’t get too high and if we lose, we can’t get too low. You need to have this consistency. We came out to play today. It was an all-around fun game. Every line played well.”