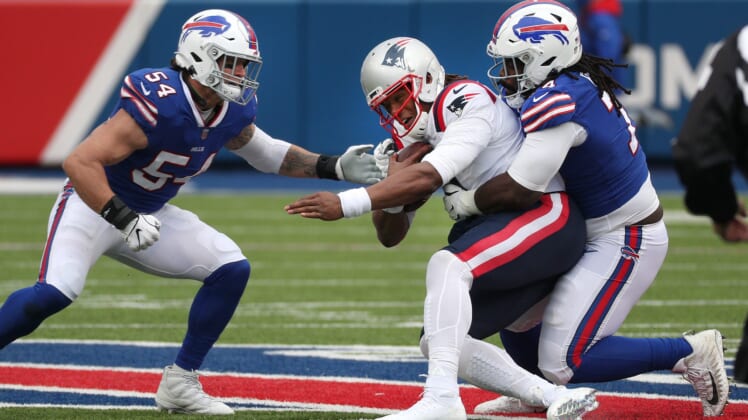 The New England Patriots took the field with Cam Newton in Week 8 for a must-win game. They headed into Buffalo with a three-game losing streak and their season on the brink, an almost unheard of situation under Bill Belichick.

Newton knew it, too. After a disastrous performance in Week 7, he prepared for Sunday’s game against the Buffalo Bills fully aware of what was at stake.

It seems those few days of practice weren’t enough to help Newton and Co. On a day when a woeful receiving corps provided him with a justified excuse for a poor passing performance, Newton fumbled this thing away on the ground. When the final whistle blew, Buffalo held on to collect their first win against New England since 2016.

Julian Edelman’s injury is quickly taking a toll on the Patriots. Yet, despite having virtually no NFL-caliber wide receivers, Newton looked pretty solid through the air. He went 15-for-25, helping this offense move the ball and avoiding an interception.

He also made a difference on the ground, racking up 54 rushing yards and a go-ahead touchdown with nine minutes left. Given the limitations of this passing attack, Newton was doing everything you could ask for. It all evaporated on his final play, a moment that might be the nail in New England’s coffin.

Trailing by three with under a minute left, New England was in field-goal range. Instead of going for the tie and overtime, Belichick went for the win. The Patriots put their faith in Newton, the former first-round pick and one of the greatest dual-threat quarterbacks in NFL history.

The play ended with what can only be called an alarmingly accurate depiction of the Patriots’ season thus far. The ball got punched out of Newton’s grasp, with the Bills recovering and cementing the Patriots’ fourth straight loss. Newton looked visibly distraught on the bench and heading to the locker room. But that’s a mistake you can’t make. Worse yet, now sitting at 2-5 with the NFL trade deadline on Tuesday, the Patriots must weigh their future.

It’s hard not to compare this last-second loss to New England’s heartbreak from its Week 2 matchup against the Seattle Seahawks. On the last play of the game, Newton took it upon himself to run the ball, hoping to be Superman with a four-yard leap into the end zone. Instead, Seattle’s defense stuffed him and he went tumbling to the grass and a potential upset victory crashed down with him. A monumental win for a short-handed team and Newton came up short once again.

Things have not gone according to plan for the man brave enough to fill Tom Brady’s shoes. He’s thrown just two touchdowns in six games, with seven interceptions and 12 sacks. While he’s thrown for 1,143 yards, with an additional 244 yards and six scores on the ground, some things can’t be ignored. Among them, being benched in the third quarter in favor of Jarrett Stidham in a dismal 33-6 loss to the San Francisco 49ers. It isn’t something the fans can forget and Newton recognizes he is in jeopardy of being benched.

Despite Newton’s ugly stats and late-game issues, though, Belichick says he’s not jumping ship just yet. The former NFL MVP is still his man and he wants us all to know that Newton will remain New England’s quarterback.