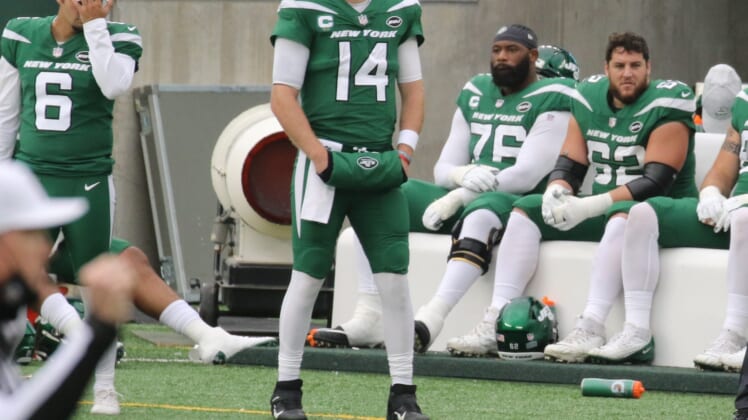 Week 7 of the NFL season delivered another great Sunday for many quarterbacks, but not every signal-caller delivered. As we saw with some of the worst quarterback performances in Week 7, success doesn’t come easy and that’s a familiar story for some young quarterbacks.

It’s one thing just to have a bad week, that happens. We weren’t concerned about Aaron Rodgers after his Week 6 dud and the same can be said for at least one passer this Sunday. On the other hand, some performances are impossible to ignore and force the panic alarm to go off. Quite frankly, it should leave a few teams questioning their future at quarterback.

Here are the five worst quarterback performances in the NFL from Week 7.

Darnold returned in Week 7 hoping to prove himself, with a chance to make his case to remain New York’s quarterback of the future. Instead, the third-year quarterback helped push the Jets further towards tanking and the opportunity to draft Trevor Lawrence.

Darnold made a few nice throws early, completing seven of his first eight attempts. Everything unraveled rather quickly after that. The rest of the way, against a defense allowing 277 passing yards and a 107.2 quarterback rating this season, it was ugly. Darnold finished 12-of-23, with two interceptions and an embarrassing 5.2 yards per attempt. Perhaps a change of scenery will help, but that isn’t coming until 2021 and he still might just be a bust. At least he is helping the Jets tank for his replacement.

Everyone expected the Steelers and Titans clash to be the NFL’s best game in Week 7, it delivered. However, because of his second-half performance, Big Ben made this game closer than it needed to be.

While some bad fortune played a role, three interceptions is a recipe for defeat. It’s not just the turnovers, there is very little vertical element to this offense. Roethlisberger finished averaging 5.5 yards per pass attempt in Week 7, a bit of a troubling sign. We’re not expecting him to carry this team, but it’s evident the 38-year-old has declined. If he can eliminate the mistakes, which will be crucial in Week 8 against the Baltimore Ravens, the Steelers remain a Super Bowl contender.

Before leaving the game on an unbelievably dirty hit, Dalton was on pace for one of the worst starts in his NFL career. Washington’s pass rush created plenty of pressure, but the 32-year-old also looked like his days as an NFL-caliber quarterback are over.

Dalton completed nine of his 19 attempts in Week 7, an ugly 47.3% completion rate. If that stat wasn’t bad enough for you, he only threw for 75 passing yards and finished with one of the worst yards per attempt (3.9) we’ve seen this season. The sprinkles on top, cementing this as one of the worst quarterback performances, an interception and a 36.1 quarterback rating. At the very least, Dalton is proving how valuable Dak Prescott is. The Cowboys are going to regret turning down Prescott’s earlier contract offers.

Newton has played with some terrible supporting casts in his NFL career, but this is the worst. With Julian Edelman limited by a knee injury, New England’s offense is dependent on first-round bust N’Keal Harry and a bunch of nothings. It’s an insanely difficult situation, but performances like this make winning impossible.

Newton completed as many passes to the San Francisco 49ers (two) as his teammates (four in the first half. With a 19.8 quarterback rating at halftime, there was nowhere else to go but up. After throwing his third interception, off a deflection, Newton (9-of-15, 98 yards, 39.7 quarterback rating) was benched. The Patriots needed Superman to salvage this season, but this offense might be his kryptonite. A blockbuster trade might change things, but even adding one receiver might not be enough.

Garbage time might have cleaned up Lock’s stat line some, but this was easily one of the worst quarterback performances in Week 7. It’s the second consecutive week Lock lands on this list and it might be time for the Broncos to be concerned.

Lock isn’t making smart decisions with the football. Against the same defense that Justin Herbert and Derek Carr picked apart, Denver’s “franchise” quarterback couldn’t get much going. Lock has a 0/4 TD/INT ratio in his past two games and is completing fewer than 60% of his passes. If the Broncos keep sliding, possibly towards a top-five pick, it might be time for John Elway to draft another quarterback.