Burning questions for Browns vs. 49ers on ‘Monday Night Football’ 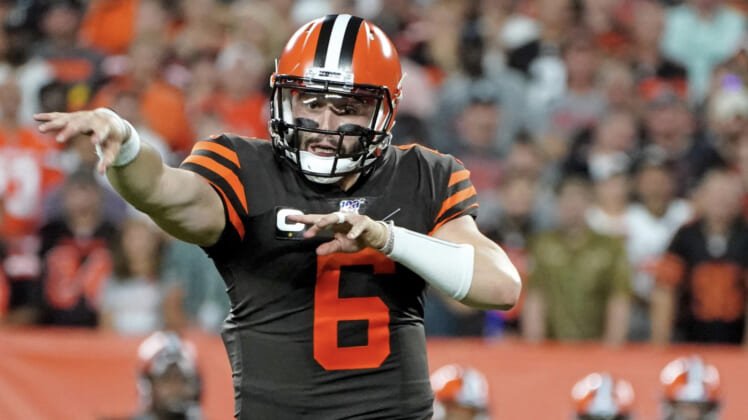 The undefeated San Francisco 49ers are hosting the Cleveland Browns on Monday Night Football to close out Week 5 of the NFL season.

The atmosphere at Levi’s Stadium should be electric. Both teams entered the season with Super Bowl hype, but both have serious questions they still need to answer heading into the second quarter of the season.

These are the biggest questions we have for the Browns and 49ers heading into Monday Night Football.

Will a 49ers wide receiver step up?

Cleveland’s defensive secondary is banged up still, with Greedy Williams and Denzel Ward both listed as questionable for Monday night’s game. If the 49ers can get something going with their receivers, they may just run away with this game. However, nobody really has stepped up as a true No. 1 option, and tight end George Kittle leads the team in both receptions and yards.

Rookie Deebo Samuel has been the most consistent receiver so far this season for Jimmy Garoppolo catching 11 passes for 147 yards and a touchdown. But nobody on the 49ers has more than one touchdown, and long term that’s a problem. Somebody needs to step up and take on the role of top dog in San Francisco’s passing game.

The 49ers can bring the heat. Rookie Nick Bosa is already one of the most dangerous pass rushers in the NFL. Dee Ford is as quick as a cat off the edge, and defensive tackle DeForest Buckner is a nightmare inside.

So far this season, Cleveland’s offensive line has allowed 12 sacks, and Baker Mayfield has made a ton of mistakes due to pressure, or perceived pressure. Needless to say, the 49ers must be licking their chops thinking about this opportunity to feast.

Will the 49ers keep creating turnovers?

Last season, no team in the NFL was worse than the 49ers at creating turnovers. They had just seven takeaways all year. Now, armed with one of the best defensive fronts in the league, this unit has become a nightmare for opposing offenses with seven takeaways in just three games.

Mayfield has already thrown six interceptions, which ranks second-worst in the NFL coming into Week 5. Richard Sherman and Co. will be itching to help Mayfield take over the league lead on Monday Night Football.

After opening the season with a couple of average games, Chubb has been dynamic the past two contests for the Browns. He ripped off 96 yards on 23 carries in Week 3, then roasted the Baltimore Ravens to the tune of 165 yards and three touchdowns last Sunday.

It’s certainly going to be fun to see if the Browns can keep the run game going strong against the 49ers. San Francisco boasts one of the best run defenses in the game today, allowing just 75 yards per game, and exactly zero rushing scores.

The 49ers are undefeated and lead the loaded NFC West. But it’s fair to wonder if this team is legit, or if the fast start is just a mirage. The reason being, the three teams the 49ers have beaten are a combined 3-13 on the season.

San Francisco’s offensive line will have its hands full trying to contain a very good defensive front led by Myles Garrett. Jimmy Garoppolo has thrown four picks in three games. The 49ers defensive secondary better be on its A game going against Odell Beckham Jr. and Jarvis Landry.

A lot could go wrong for the 49ers Monday night. How the team handles its first real test of the season will be telling.