Burning questions for 49ers vs. Cardinals on ‘Thursday Night Football’ 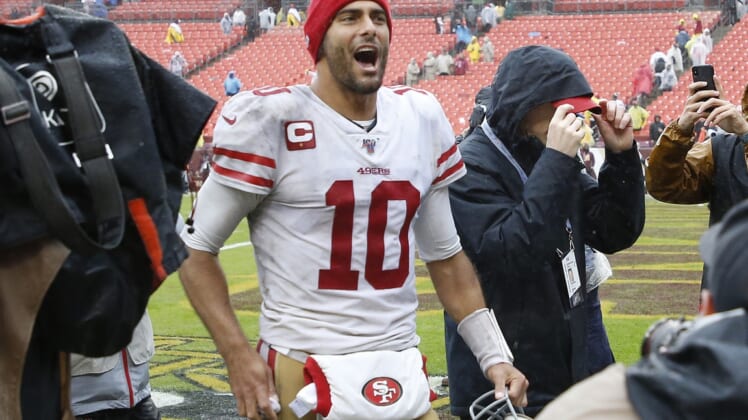 The undefeated San Francisco 49ers head to the desert to take on the division-rival Arizona Cardinals on “Thursday Night Football.”

On paper, this game seems to be a major mismatch in San Francisco’s favor. Kyle Shanahan’s squad is currently 10-point favorites and is coming off a 51-13 blowout win over the Carolina Panthers.

On the other hand, Arizona has won three of its past four games under rookie quarterback Kyler Murray and first-year head coach Kliff Kingsbury.

Here, we check in on five burning questions for this mid-week all NFC West matchup.

We know that this rookie quarterback has the athleticism and field awareness to avoid the pass rush. We’ve seen it time and again through his first half season in the NFL. However, Thursday night is going to be a completely different beast.

San Francisco is coming off a seven-sack performance last week. Rookie defensive end Nick Bosa had three of them and could very well be the Defensive Player of the Year right now. This doesn’t even take into account the presence of Dee Ford, Solomon Thomas, DeForest Buckner and Arik Armstead, who have a combined 15 sacks on the season.

For his part, Murray is playing behind a makeshift offensive line that has yielded 27 sacks through eight games. The biggest key will be for him to maintain his composure. Will Murray be up for it?

Will Kyle Shanahan open it up some?

Despite being ranked near the top in every single rushing category and in points scored heading into Thursday’s action, San Francisco’s pass offense has left a lot to be desired. Sure playing with big leads makes this aspect of the offense less important. But it still has to be a bit concerning.

The 49ers head into Week 9 ranked 24th in passing yards and tied for 22nd in passing touchdowns. Taking on a Cardinals defense that has yielded 20 touchdowns and two interceptions for a 116.0 passer rating, one has to wonder if Shanahan will decide to open it up with Jimmy Garoppolo some.

Can the Cardinals get a rushing attack going?

This is not an ideal scenario for Arizona. Kliff Kingsbury’s offense will be without its top two running backs in that of David Johnson and Chase Edmonds Thursday night. The recently acquired Kenyan Drake and Alfred Morris will handle a bulk of the backfield duties.

This is one matchup that might have ultimately gone in Arizona’s favor. San Francisco ranks just 11th in the NFL in stopping the run. While that’s good, it does not compare to how elite the pass defense has been.

If the Cardinals can’t get a rushing attack going, Kyler Murray will be in for a long Halloween. After all, the 49ers are the first team in 40-plus years to yield 100 or fewer net passsing yards in four consecutive games.

Will recent struggles against the Cardinals come to an end?

We fully understand that this year’s 49ers team is much different than the first two versions under Kyle Shanahan. Even then, there has to be a mental factor to this. Shanahan has lost all four of his meetings against the Cardinals since taking over as San Francisco’s head coach. The four losses have come by a combined 26 points.

Going back a bit further, the 49ers have lost their last eight meetings against the Cardinals and have not won in the desert since December of 2013. This is something the Cards could hang their hats on.

Can Arizona keep this one close?

As we noted before, Arizona has done well to overcome an 0-3-1 start to the season. That includes wins over the Bengals, Falcons and Giants before a blowout loss to the Saints last week. However, those three teams boast a combined 3-21 record and Arizona won them by a total of 11 points.

The 49ers are obviously a different monster. The Cardinals have been outscored by 63 points in four games against teams that are currently over .500. Meanwhile, San Francisco is outscoring its opponents by a total margin of 207-77 through seven games. That includes an absurd 111-23 mark over the team’s past four games. Yeah, don’t expect this one to be terribly close.