In a time when American citizens want to see fewer tax dollars go to sports arenas, the Buffalo Bills could still land nearly $1 billion in public funding for a new stadium.

On Monday, Buffalo News reporter Jason Wolf tweeted that a deal on the construction of a brand new Buffalo Bills stadium could be announced at some point this month. “Orchard Park. No dome. Covered seats. Grass field. ~50,000 PSLs & season tix. 2026, at the earliest. Ralph razed for parking,” he wrote.

Along with the location of a new home for the surging upstate New York franchise, Wolf also suggested that the state could pony up a large portion of the funds towards the $1.4 project. On Thursday, Sports Business Journal revealed specific details on the cost to NY taxpayers, and while it won’t be over $1 billion, it is still pretty close.

“Sources say those numbers are right, but need clarifying. The ‘more than $1 billion’ figure includes annual contributions to maintenance and capital expenditure funds, above and beyond the stadium’s $1.4 billion construction budget. The public share of the actual construction is more like $850 million, though that’s also a matter of definition,” the outlet reported.

The deal is reportedly close, but still far from finalized. It will be interesting how it all plays out considering that NY Governor Kathy Hochul will be running for re-election this year. With sentiment strong across the country against taxes going towards new sports arenas, the deal is not a slam dunk to get final state approval.

Taxpayers in NY would be footing 60% of the stadium bill under the reported terms. Making it the first NFL stadium with majority public funding since the opening of Lucas Oil Stadium (Indianapolis Colts) and State Farm Stadium (Arizona Cardinals) in 2008. 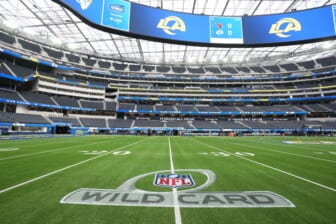 In February, three members of Congress introduced a bill called the “No Tax Subsidies for Stadiums Act.” If ratified, such a bill would curtail any and all hopes for the Buffalo Bills to get public funding on a new stadium. Which could once again open the door to the idea of the franchise moving from Orchard Park.