At long last, a very fresh and funny take on facing the same team for a third time.

Each year when the NFL Playoffs roll around there’s always a healthy chance that at least one set of division foes will face each other for a third time, especially after the extra wild card spot was added prior to the 2020 season.

Whenever this happens, the media chatter that typically makes the rounds is the predictable and heavily repeated mantra of, “you never want to play the same team three times.” But Buffalo Bills offensive lineman Dion Dawkins — whose team will face the Dolphins in Orchard Park this weekend — has stepped up with a whole new line of thinking when it comes to this scenario, successfully putting to bed all the stale takes when it comes to these fateful third meetings.

And the affable Dawkins made sure to bring the funny with him. Although when he initially started answering the question from a media member about seeing the Dolphins again, the 6-foot-5 lineman seemingly began heading down cliche lane until abruptly switching gears and comparing the game to a third date.

Here’s the meat of what Dawkins said in the video before reporters understandably burst into laughter:

“Like, if you go on a date with someone three times, then you should know that she or he, whoever you’re with, likes a lemon drop or a Shirley Temple … I kind of look at it for what it is. Like, I don’t make it about all these giant things. Like, you know, we’re going on our third date. Hopefully, we can take ’em home.”

Dawkins on facing Miami Dolphins a third time this season

Shirley Temples? Lemon drops? What a refreshing angle to a tired take in dire need of a major upgrade.

The media’s reaction was tremendous, no question. But Dawkins’ ear-to-ear smile upon seeing what his unique take had inspired was even better.

If there’s a player on this Buffalo Bills team that isn’t easy to root for, it would probably be the first. Additionally, it should be noted just about everything is coming up “3” these days when it comes to the Bills. No one should be surprised at this point. 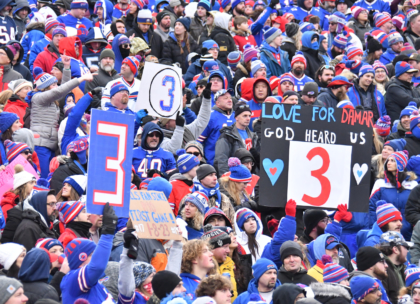 On a related note, there will be a total of three “third dates” taking place in the opening round of the NFL Playoffs alone. The two additional matchups are between noted division rivals.

The Baltimore Ravens face the Cincinnati Bengals for the second time in a week while the San Francisco 49ers will be hosting their longtime rival Seattle Seahawks.