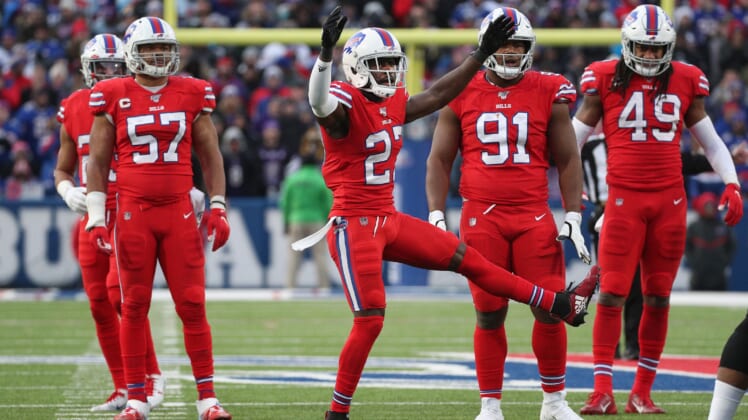 Bills cornerback Tre’Davious White dances between plays as he gets the crowd excited. Jg 120819 Bills 28

NFL teams are really taking care of business ahead of the start of the regular season in mere days.

We’ve already seen the likes of Deshaun Watson and Keenan Allen locked up on long-term deals earlier on Saturday. We can now add another star player to the list.

NFL Media’s Ian Rapoport was the first to report this massive extension. A little bit later, it was noted that the former LSU standout had received a four-year contract worth $70 million.

In terms of average annual salary, it surpasses the $16.68 million Darius Slay is earning with the Philadelphia Eagles after they acquired him in a blockbuster trade with the Detroit Lions this past spring. He’s more than earned it.

A first-round pick of the Bills back in 2017, White recorded 58 tackles, 17 passes defended and a league-high six interceptions a season ago. Still only 25 years old, he acted the part of a shutdown corner.

According to Pro Football Focus, White did not allow a single touchdown in 599 snaps in coverage last season. For his career, White has yielded five touchdowns while coming up with 12 interceptions.

In terms of White’s contract, it’s just a continuation of top-end cornerbacks getting paid big time by their teams recently.

Needless to say, teams are valuing the cornerback position at an all-time high level in today’s pass-first NFL.