Bold predictions for second half of the NBA season 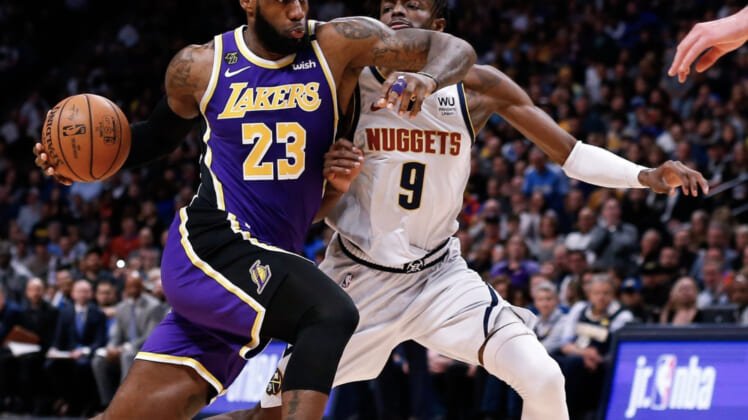 The unofficial second half of the NBA season will get going later this week after what has been an event-filled All-Star weekend.

There’s a whole heck of a lot still in play with about two months remaining on the slate.

Just how bad will the eighth seed in the Eastern Conference be once all is said and done? Will the Philadelphia 76ers retain Brett Brown should the team struggle out of the post-break slate?

Over in the Western Conference, the Denver Nuggets are looking to put both Los Angeles teams on notice. Meanwhile, star rookie Zion Williamson and the Pelicans will continue to make waves.

These are among the six bold predictions for the remainder of the NBA season coming out of the All-Star break.

This conference has not been as bad as we’ve seen in recent seasons. A total of five teams are 10-plus games over .500. With this top-heaviness has come a major divide between those teams and the rest of the conference. In fact, the Orlando Magic are currently the eighth seed at 24-31 on the season.

It’s crazy to think about. The 20-33 Washington Wizards are just three games out of that final playoff spot. Heck, the Chicago Bulls (19-36) find themselves just five games out. I’m here to predict that one of these three teams makes the playoffs at 36-46, at best. It will ultimately lead to one of the most lopsided playoff series in NBA history when the Milwaukee Bucks come calling.

Nuggets slip past Lakers in the West

The Denver Nuggets were among the best teams in the NBA heading into the All-Star Break. They got red hot, posting a 24-9 record to close out the first half after starting the season 14-8. This included a 24-point road win against the Lakers back in late December. An overtime loss to those very same Lakers this past Wednesday does not change the fact that Denver is for real.

I’m going to boldly predict that Denver makes up the four games that separates itself from Los Angeles over the final two months of the season. All-Star center Nikola Jokic will finally get into shape. Jamal Murray will continue to play at a high level. Meanwhile, youngster Michael Porter Jr. will be the Nuggets’ ace in the hole. Look for the Western Conference to go through Mile High once the playoffs start.

Following what was a uneven pre-break performance, the Sixers head into the second half as the fifth seed back east. Brown’s coaching has come into question, leading to general manager Elton Brand failing to commit to him for the remainder of the season. While a team in playoff positioning firing its head coach is rare, I’m here to boldly claim that’s going to happen.

Philadelphia has an experienced assistant in that of Jim O’Brien who coached the team to the playoffs back in 2004-05. Maybe he can light a fire under this star-laden squad, the dramatic Joel Embiid included. After all, the Sixers are going nowhere fast under Brown. If it’s not in the second half of the season, it will be this coming summer. Brown is not long for the job in Philly. That much is clear.

Pelicans sneak into the playoffs

Boasting a 23-32 record, New Orleans finds itself 5.5 games out of the final playoff spot in the Western Conference. That’s a lot of room to make up with just 27 regular-season games remaining. Though, recent trends seem to suggest that Zion Williamson and Co. could very well sneak into the playoffs.

New Orleans ended the first half winning 16 of its final 25 games. Williamson is playing at an historical level as a rookie. Fellow youngster Brandon Ingram is a first-time All-Star. Lonzo Ball has improved leaps and bounds over the past month or so. Everything seems to be aligning for Alvin Gentry’s squad to earn the eighth seed out west. Expect it to happen.

Currrently 46-8 on the season, Milwaukee would need to win 24 of its final 28 games to become just the third team to win 70 games in a single season, joining the 1995-96 Chicago Bulls and 2015-16 Golden State Warriors in that elite company. Could Giannis Antetokounmpo and Co. accomplish this feat?

First off, the Bucks are surprisingly just 6.5 games ahead of the streaking Toronto Raptors for the No. 1 seed back east. At the very least, the team will be playing meaningful basketball up until the final couple weeks of the season. Of Milwaukee’s final 28 games, almost half of them are against teams under .500. There’s a darn good chance this team will indeed finish 70-12 or better. What an amazing accomplishment that would be.

A lot has been made about Giannis Antetokounmpo winning his second consecutive MVP award. Given the Bucks’ success and his absurd numbers, that makes sense. Houston Rockets star James Harden has been a favorite for this individual honor all season.

Neither will come away with the hardware. Instead, it will go to LeBron James. The 35-year-old is playing at an otherworldly level. James is averaging 25.0 points, 7.8 rebounds and an NBA-high 10.8 assists per game. He’s also plus-8.2 per game when on the court. After failing to earn this award since all the way back in 2013, James will hoist the trophy for the fifth time — matching MJ for second on the all-time list.